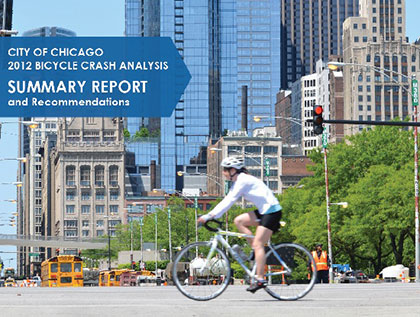 The Chicago Bicycle Crash Analysis looks at all aspects of bicycle crashes in the city. With this report, we set out to
identify all of the factors that contribute to bicycle crashes in Chicago, and then set goals for improvement. The period
of study (2005-2010) gives us a clear picture of what we need to achieve the goals of Chicago’s Bike 2015 Plan and
the Streets for Cycling Plan 2020.

The report lays out benchmarks for various types of crash data and information. Locations, time of day,
gender and weather are just a few of the elements and factors we looked at to analyze crashes in Chicago. At the end
of the report, you will find a comprehensive set of recommendations for improvements to our bike network and our
reporting mechanisms that will work to improve bicycling for all Chicagoans and visitors alike.

Bicycle crashes in Chicago remain a serious concern. In the six-year period between 2005 and 2010, there were nearly 9,000 injury crashes involving bicyclists, with 32 bicyclist fatalities. As a percentage of all traffic crashes, bicycle crashes are on the rise: from 6.7 percent of all crash types in 2005 to 9.8 percent of all crash types in 2010. Perhaps the most important point to be made is that with proper street design and behavior change amongst road users, the overwhelming majority of bicycle crashes are preventable.