Learn about Anish Kapoor, the artist who designed Cloud Gate in Millennium Park, below. 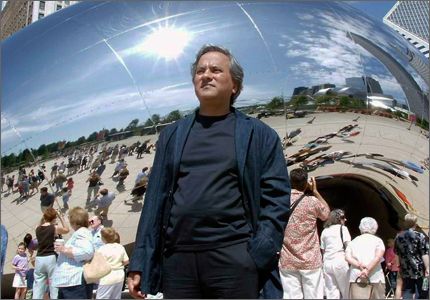 Anish Kapoor (Bombay, 1954) has lived in Londonsince the early 1970s where he began his distinguished career as a student at Hornsey College of Art and Chelsea School of Art Design. Over the last 20 years, Kapoor has emerged as one of the most prolific and respected sculptors in the world. In July 2004, Kapoor unveiled his first-ever site-specific installation in the U.S. with a monumental work that anchors Millennium Park.

The internationally-acclaimed Anish Kapoor has had solo exhibitions of his work in venues such as the Guggenheim Museum in New York, Institute of Contemporary Art in Boston, Kunsthalle Basel, Reina Sofia in Madrid and CAPC in Bordeaux. He has also participated internationally in many group shows at the Whitechapel Art Gallery, The Royal Academy and Serpentine Gallery in London; Documenta IX in Kassel; Moderna Museet in Stockholm; and Jeu de Paume and Centre Georges Pompidou in Paris.

Anish Kapoor was awarded the "Premio Duemila" at the Venice Biennale in 1990, the Turner Prize Award in 1991 and was awarded an Honorary Fellowship at the London Institute in 1997 and a CBE in 2003. He is represented by the Lisson Gallery, London, Barbara Gladstone Gallery, New York and Galleria Massimo Minini, Italy.