AIS provides other City Departments with the tools they need to do their jobs. 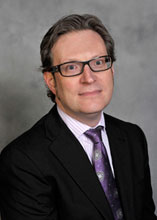 David J. Reynolds, P.E., LEED A.P. was appointed Commissioner of the Department of General Services by Mayor Rahm Emanuel and confirmed by the Chicago City Council on June 8, 2011.

In the 2012 Budget Recommendations, Mayor Emanuel proposed the consolidation of the Departments of General Services and Fleet Management into the new Department of Fleet and Facility Management with Reynolds serving as Commissioner.

Prior to his work at the Illinois Facilities Fund, Reynolds served as Vice President of Earth Tech, Inc. (now AECOM). In that capacity, he was responsible for traditional environmental services, integrated solutions, and emerging issues for the global engineering company.

Previous to his work at the Illinois Facilities Fund and Earth Tech, Reynolds served as First Deputy Commissioner for the Chicago Department of Environment. He served as the Chief Operations Officer and was instrumental on such key projects successes as the Chicago Center for Green Technology, Green Homes for Chicago as well as the Chicago Standard for Building Green.

He earned his Bachelor’s Degree in Civil Engineering at Rose-Hulman Institute of Technology.