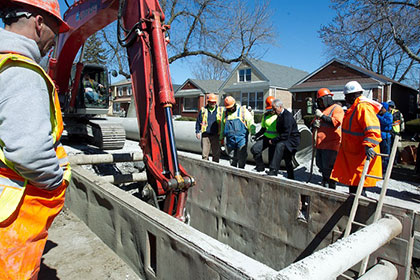 Mayor Rahm Emanuel announced today the City has identified nearly 125 additional miles of streets to be repaved in neighborhoods throughout the City in 2015. The announcement is the next step in the Mayor’s new annual standard of repaving at least 300 miles of roads, a significant increase from previous years.

“Every resident in the City of Chicago deserves streets that are paved and passable to get to work, school, or just around their neighborhood, which is why we are setting a new standard of paving at least 300 miles a year going forward," said Mayor Emanuel. "Whether it's paving more miles of roads or upgrading the water and sewer mains beneath them, we are making the essential investments to give our 21st century city a 21st century infrastructure and ensure a good quality of life for every neighborhood in the City of Chicago."

The work announced today is part of a strategy to replace aging water lines, which are on average more than 100 years old, and repave Chicago's streets. The 125 miles includes 90 miles of repaving following the installation of new water mains and 22 miles of repaving following the installation of new sewer mains. The remainder of this portion of repaving work will take place on arterial streets to be conducted by CDOT, or in conjunction with work being completed by People’s Gas. In January, Mayor Emanuel announced the City had identified the first 60 miles of streets that would be resurfaced.

At Mayor Emanuel’s direction city departments and private utilizes have greatly increased paving efforts. Since 2011 more than 1,000 miles of streets have been repaved – nearly a quarter of Chicago’s streets. In 2014 alone, CDOT, the Department of Water Management (DWM), private contractors and utilities combined to repave a record 343 miles of roadway.

To ensure the City is not only increasing repaving, but increasing the effectiveness of that work, the City has improved coordination on infrastructure projects. Mayor Emanuel is demanding better coordination between City agencies and private utilities to ensure newly paved streets aren’t being torn up for other work.

To that end, CDOT’s Project Coordination Office, City infrastructure departments and utilities have worked together to reduce the amount of project conflicts that would open up a street more than once.