In the 19th century, Chicago built the world’s first modern skyscraper. In the 20th century, we created a world-renowned skyline. And today, Chicago aspires to make that skyline the most efficient on the planet. 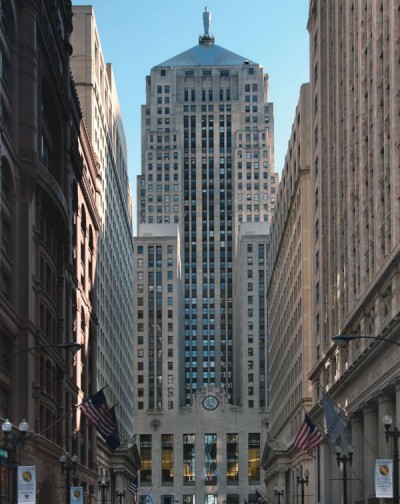 Chicago Board of Trade Building™

Since 1930, the Chicago Board of Trade has been operating out of 141 West Jackson Boulevard, Chicago, in a building designed by architects Holabird & Root that is 605 feet (184 m) tall, the tallest in Chicago until the Richard J. Daley Center superseded it in 1965.

This Art Deco building incorporates sculptural work by Alvin Meyer and is capped by a 31-foot (9.5 m) tall statue of the Roman goddess Ceres in reference to the exchange's heritage as a commodity market. On May 4, 1977, the Chicago Board of Trade Building™ was designated a Chicago Landmark. The Building is now a National Historic Landmark. Today the Board of Trade Building™ is closely joined by numerous skyscrapers in the heart of Chicago's busy Loop commercial neighborhood.