On June 28, 2019, Illinois Governor J.B. Pritzker signed into law a gambling expansion bill, which included the allowance of the first-ever casino in Chicago. Less than a month later, Mayor Lightfoot announced next steps towards the City’s initial efforts to plan for the casino. A City-wide survey was released on July 26, 2019, allowing residents to voice their opinions on aspects of the casino, including location, amenities, benefits, and concerns. The online survey was distributed over social media networks, made available at Chicago Public Library locations, and shared via news media outlets.

This document highlights key themes and takeaways from the survey responses and outlines guiding principles for the City to consider in the development of a potential casino. Note that on most of the questions, respondents were asked to select up to three answers and were given the option for written responses as well.

One week after the survey was released, over 10,000 residents self-reported their views on the Chicago casino. Responses came from a representative sample of ages and locations. The highest percentage of respondents fell in the 30- to 39-year age range (27%). Respondents to the survey hailed from all over the City, as shown by the map below. Roughly 3% of respondents did not reside within City limits. 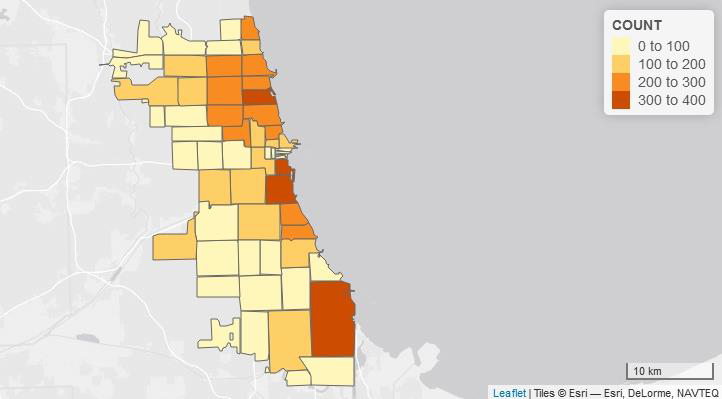 Respondents were asked to address their general sentiment regarding building a casino in Chicago to increase the City’s financial stability. On a scale ranging from zero to 100, with zero being no support and 100 being fully supportive, the average response was 59. Further, over 53% of respondents indicated they would visit the casino at least a few times per year. Taken together, these two results highlight respondents’ openness to the idea of a casino in Chicago.

Most respondents expressed that the ideal location for a casino would be near downtown or in a location that would generate new development. According to the results, the site should maximize tax benefits while minimizing disruption to the natural environment and local culture.

Over 36% of respondents expressed their ideal location for a casino is near downtown. 32% indicated their preference for placing the casino in a location that would generate new development. Similarly, 24% favor an area that would maximize profits. Based on open response comments, generating revenue from tourists was the biggest reason for building the casino near downtown.

While a location that generates new development was the second most popular answer, many respondents expressed concern about building the casino in economically disadvantaged communities. Respondents urged the City to think carefully about additional economic development to support residents of those communities should such an area be chosen. 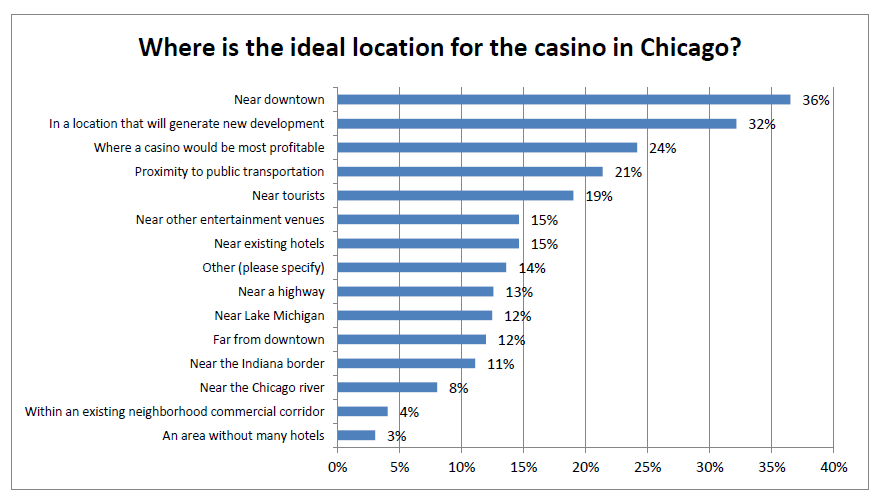 Most respondents want the casino to include additional amenities such as restaurants and/or theater & live entertainment.
Additional amenities were requested by a majority of respondents. 58% indicated that the casino should include restaurants. 51% of survey respondents want a casino to include theater and live entertainment. Other top answers included a hotel (41%), a music venue (38%), and nightlife activities (25%).

With the legalization of sports betting and the upcoming legalization of recreational marijuana use in Illinois, many respondents want Chicago to take advantage of these opportunities writing in their support for including a sportsbook where gamblers can place sports bets and/or a cannabis dispensary as part of the casino.

Some respondents also expressed concerns about gambling addiction writing in their desire to see an addiction support center in or near the casino.

According to respondents, among the most important benefits of opening a casino in Chicago would be increased tax revenue and increased employment.

The biggest concerns respondents selected from the listed options were the possibilities of increasing traffic and congestion, fueling gambling addiction, and displacing residents. By far the most common written answer for this question was increased crime.

55% of respondents were concerned about the casino bringing increased traffic and congestion, particularly if placed downtown or in other already-congested areas of the City. Additionally, 47% of respondents cited concerns about gambling addiction. 44% were worried about the displacement of local residents, especially if the location chosen is in a heavily residential community or contributes to the gentrification of the neighborhood.

When given the option to write in additional concerns, around 33% of responses expressed concerns about an increase in crime and corruption in the areas surrounding the casino.

The survey was distributed on Survey Monkey across multiple channels, including social media, Chicago Public Libraries, and news outlets. The City urged all residents to take the survey regardless of their views on the casino, however respondents ultimately self-selected to participate. If respondents did not complete the survey, their results were not included.

Mayor Lightfoot deeply values community voice and her team will be using these findings as guiding principles when moving forward with any decisions regarding the development of a casino in Chicago.