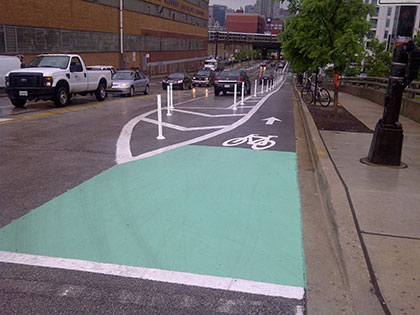 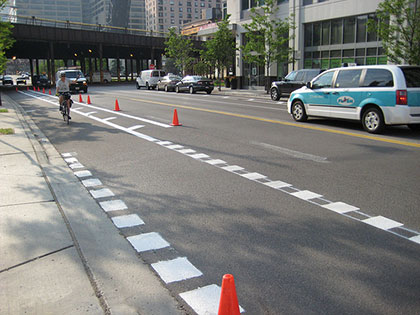 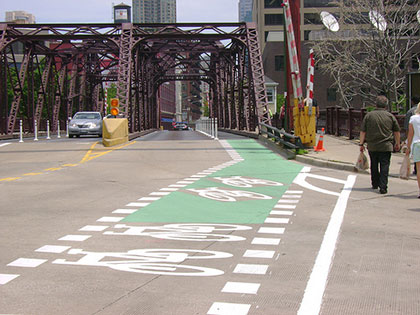 The 1/2-mile lane is the first in Mayor Emanuel's plan for 100 miles of protected lanes citywide.

The protected lane sits adjacent to the curb.  Lane width varies between 5-1/2 to 7 feet wide.  The lane is separated from moving traffic by a 4-foot-wide buffer zone that includes flexible posts to help delineate the lane, as well as an 8-foot-wide parking lane.

Four of the boxes will be installed:  two at Milwaukee and Kinzie (for right and left turns from southbound Milwaukee), one at eastbound Kinzie at Wells,  and one at Kinzie and Desplaines.

A bike box sits at the front of a travel lane at an intersection, positioned in front of vehicles.  The bike boxes—which are 16 feet long and run the width of the lane—provide cyclists a place to wait at a red light where they are visible to motorists, and aren't exposed to vehicle exhaust.

The bike boxes will be painted with green, skid-resistant paint to help increase visibility.

Bike boxes have been used in many U.S. cities to increase safety, and have been effective in reducing so-called “right-hook” crashes, in which right-turning vehicles hit cyclists traveling straight through the intersection.

The open-grate deck of the Kinzie bridge is being modified with non-slip fiberglass panels to create a smoother riding surface.  The custom-fit panels will be fabricated by August, with installation following immediately.

Check out this Chicago Works story about the Kinzie lane

Read more about the Kinzie lane and the Mayor's plan here.

Some media coverage of the Kinzie bike lane: