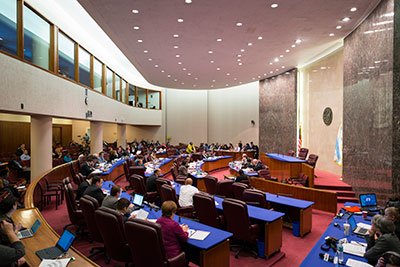 As the legislative body of the city, the City Council usually meets once every month to exercise general and specific powers delegated by state statute.

Its 19 standing committees work with individual departments on the execution of city activities, and review proposed ordinances, resolutions and orders before they are voted on by the full council.

The City of Chicago is divided into fifty legislative districts or wards. Each district is represented by an alderman who is elected by their constituency to serve a four year term. In addition to representing the interests of their ward residents, together the fifty aldermen comprise the Chicago City Council, which serves as the legislative branch of government of the City of Chicago.

The legislative powers of the City Council are granted by the state legislature and by home rule provisions of the Illinois constitution. Within specified limits, the City Council has the general authority to exercise any power and perform any function pertaining to its government and affairs including, but not limited to, the power to regulate for the protection of the public health, safety, morals and welfare; to license; to tax; and to incur debt.