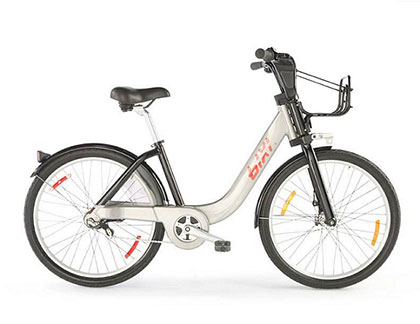 “Chicago is going to offer one of the top bike sharing programs in the world, and one of the largest in the United States,” said Mayor Rahm Emanuel. “Alta and their partner, Public Bike System Company, are the global leaders in bike sharing programs.  They will set up and operate the new system that will be a key part of achieving our goal of making Chicago a world-class city for bicycling.”

The Chicago Department of Transportation (CDOT) issued a request for proposals in September 2011 seeking a company to operate what will be one of the country’s largest bike-sharing programs.  The RFP called for a system to include 3,000 bikes and 300 docking stations in 2012, with an additional 1,000 bikes and 100 stations in the following 12 months. A TIGER grant was awarded by USDOT in 2012 to fund the Phase 2 expansion in 2013.  The program will be self-sustaining through member and user fees, as well as advertising and sponsorship.

Alta was unanimously selected from three RFP responses. An evaluation committee made up of representatives from Chicago Transit Authority, Chicago’s Department of Procurement Services, and CDOT unanimously determined that Alta’s proposal had the most comprehensive approach to operations in terms of personnel, operations of and experience with large-scale systems, and equipment needed to manage the system.  In addition, the PBSC equipment proposed by Alta Bicycle Share provided the best combination of durability, performance, quality, and aesthetics.

Chicago’s bike share system will provide a convenient, easy-to-use transit option envisioned for point-to-point short trips.  Users will pick up a bike from a self-service docking station, ride to their destination and drop off the bike at the nearest station.

“Bike sharing is a great option to supplement existing transportation choices. It can be used to fill gaps in the transit system or to complete the last segment of a trip between a transit station and the workplace,” said CDOT Commissioner Gabe Klein. “In addition, bike sharing will to help to reduce traffic congestion, improve air quality and promote health and fitness, which will enhance the quality of life for everyone who chooses to use it.”

The specially designed bikes will feature multiple speeds, chainguards, fenders on both wheels, a cushioned seat and a basket, and will appeal to cyclists of all skill levels.

Membership and user fees will be affordable for Chicagoans and visitors alike.  Annual, weekly and daily memberships will offer flexible options for users. Members will sign up via a web site, while one-time users will use a credit card at the automated kiosk.

The solar-powered docking stations will be placed about a quarter-mile apart, and located in high-density areas, including near transit stations.  CDOT will work with Alta and the public to determine station locations. The stations are modular and mobile and can thus be expanded in reaction to demand, or moved based on need or construction. Initial funding for the program will come from federal grants designed for projects that help reduce traffic congestion and improve air quality.