In response to the evolving COVID-19 pandemic, the City of Chicago has joined the State of Illinois in issuing a Stay at Home order effective Saturday, March 21st at 5pm CT. In addition, City of Chicago facilities are closed to the public. Staff are prioritizing essential services to protect the health and safety of our residents and employees. As such, we may be delayed in responding to non-essential inquiries and service requests. To stay up to date on the City of Chicago’s COVID-19 response, please visit the City Coronavirus Response Center site. 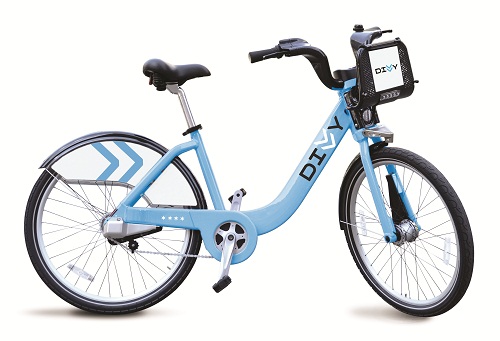 The Chicago Department of Transportation (CDOT) announced today that it will launch the city’s new bike share system – called “Divvy” – later this spring, with the goal of expanding to 4,000 bikes at 400 neighborhood locations over the next year.

“Bike sharing is another large step we’re taking to make Chicago the best big city in America for cycling,” Mayor Rahm Emanuel. “We are improving our bicycling infrastructure to create the quality of life that will attract businesses and families to Chicago.  Divvy bikes will provide Chicagoans and visitors with more options for getting around our neighborhoods.”

The system is dubbed “Divvy” to reflect the nature of bike share, where members “divide and share” the use of the bikes. The bicycles’ distinctive “Chicago Blue” paint is the same color as the stripes on the Chicago city flag, and will provide a high level of visibility on the street.

Divvy will give Chicagoans and visitors access to a bike when they want one, without having to worry about storage or maintenance.  It also leverages Chicago’s public transit system to help commuters complete the first or last few miles of their trip.  In comparable cities, half of all bike share trips are made to or from a public transit station.

Divvy will provide a convenient, easy-to-use transit option available 24 hours a day, 7 days a week, 365 days a year.   It is envisioned for short point-to-point trips, or as alternative option for a multi-mode commute.  Users will pick up a bike from a self-service docking station and return it to any other station nearest their destination.

The specially designed, heavy-duty bikes will be comfortable for all users.  Features include a one-size fits all design, upright handlebars, wide seats, hand brakes, and a chain guard to protect clothing.  The bikes feature headlights and taillights that automatically illuminate as the bike is pedaled.

Users will be able to purchase $75 yearly memberships or $7 daily passes, which will allow for unlimited trips up to 30 minutes each.   Annual members will be able to enroll online at www.divvybikes.com and receive a personal key used to quickly unlock bikes from any station.

Divvy stations will be placed near transit stations, employment centers, shopping districts, schools and other popular destinations.   They will generally be located on sidewalks or on the street near the curb.   The stations are wireless, solar powered and modular so that they can be easily installed.   Most stations will have 15-19 bike docks, with open docks at each station for returning bikes.

Divvy’s inspired logo indicates a sense of direction and motion through a distinctive double-V ligature.   Marked on streets across the world, this double-arrow symbolizes the shared use of roads by both bicyclists and motorists.   In transportation vernacular, this symbol is often called a “sharrow.”

Last year, Mayor Emanuel unveiled the Chicago Streets for Cycling Plan 2020, which calls for a 645-mile network of biking facilities to be in place by 2020 to provide a bicycle accommodation within half-mile of every Chicagoan.  Divvy bikes and solar-powered docking stations will be an integral part of this network.

Beginning in late 2012, CDOT solicited suggestions from the public on where the stations should be to be located through the Chicago Bicycle Program website (www.chicagobikes.org/bikeshare).  To date, Chicagoans have made more than 1,300 suggestions for station locations with more than 11,000 votes of support.  The siting process is continuing and locations will be announced later this spring.  The stations are modular and mobile, and can be moved or expanded in reaction to demand.

Initial funding for the program is from federal grants for projects that promote economic recovery, reduce traffic congestion and improve air quality, as well as additional funds from the City’s Tax Increment Financing program.  The project continues on budget and schedule for a late spring rollout.

The system will grow in several steps after the initial launch of about 75 stations, expanding to at least 4,000 bikes at 400 stations in 2014.  The Divvy service boundaries are roughly from 63rd Street to Devon Avenue, from Lake Michigan to California Avenue.

Chicagoans can find out more about the system through social media on Twitter at @divvybikes and on Facebook at www.facebook.com/divvybikes.