Divvy Bikes Off to a Fast Start

25,000 Bike Trips Taken, 88,000 Miles Ridden in First Two Weeks of Operation; Installation of New Stations to Begin Next Week, Ramping Up to 300 this Summer 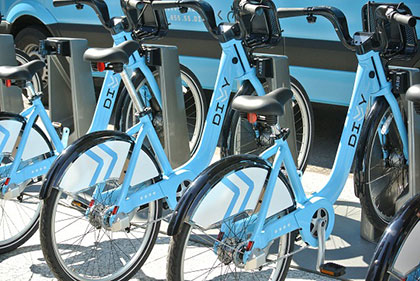 In just the first two weeks of the Divvy bike share system in operation, Chicagoans and visitors to the city have taken more than 25,000 trips and have collectively ridden an estimated 88,000 miles, the equivalent of pedaling around the earth three and a half times.

Divvy staff will begin to install new stations next week, ramping up from the current 70 stations and 700 bikes to 300 stations and 3,000 bikes by the end of this summer.  By next spring, Divvy will be in 400 neighborhood locations with 4,000 bikes.

“Chicagoans and our visitors have embraced Divvy as a new transportation option, and we are now ready to expand the system so more people can safely and efficiently travel around the city's neighborhoods,” said Mayor Rahm Emanuel.  “In just two weeks, Divvy has made a significant impact on the way people move around Chicago.”

Each Divvy station has a touchscreen kiosk, station map, and a docking system that releases bikes using a Member key or ride code.  Customers can purchase $75 Annual Memberships or $7 24-Hour Passes, which allow riders unlimited trips in that period.  The first 30 minutes of every trip are included in the cost of the Membership or Pass, and incremental fees apply to trips that exceed 30 minutes.

Annual Members use a personal key used to quickly unlock bikes from any station.  More than 2,500 Chicagoans have already signed up for Divvy Annual Memberships at DivvyBikes.com.

The system is dubbed “Divvy” to reflect the nature of bike share, where members “divide and share” the use of the bikes.  The bicycles’ distinctive “Chicago Blue” paint is the same color as the stripes on the Chicago city flag, and will provide a high level of visibility on the street.

Chicagoans can find out more about the system through social media on Twitter at @DivvyBikes and on Facebook at www.facebook.com/DivvyBikes.