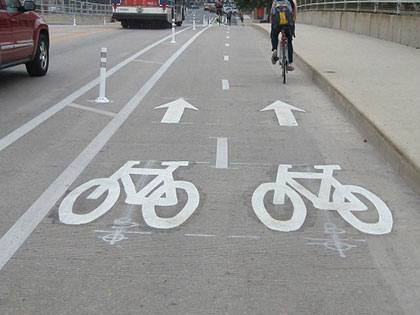 The safety improvements along the 0.85-mile stretch of Milwaukee between Kinzie Street and Elston Avenue include: a resurfaced roadway; bike lanes in each direction that are protected from vehicular traffic with physical barriers and buffers; improved pedestrian crossings; and increased bike parking opportunities.

Since Mayor Emanuel took office two years ago, CDOT has built more than 60 miles of new bikeways, half of which are protected with barriers or buffers. The City is keeping pace with the mayor’s commitment to build 100 such protected bike lane miles in his first term in office.

“Improving our bicycling facilities is critical to creating the quality of life in Chicago that will attract businesses and families to the city,” said Mayor Rahm Emanuel.  “As our city grows, it is imperative that our streets include safe bicycle infrastructure that encourages all residents to ride their bikes.”

The new Milwaukee design will complement Chicago’s Divvy bike share system and makes the corridor a “complete street” by improving transportation options for all roadway users.

“We are redesigning intersections to ensure they are safer for bicyclists, and improve hundreds of miles of residential and commercial streets for the people who use them every day,” said CDOT Commissioner Gabe Klein. “Chicago is planning to build more protected bike lanes than any other city in the country, and will soon be the most bike-friendly city in the United States.”

On the bridge over the Ohio Street Feeder Ramp, the new protected bike lanes double in size to allow for a passing lane for faster cyclists – the first of its kind in Chicago.  Each intersection in the corridor now has bicycle-specific pavement markings to provide guidance to bicyclists.  At the intersection of Milwaukee and Elston, a new bicycle signal and right-turn arrows have been installed to reduce conflicts between cyclists and motorists and improve capacity for right-turning motorists.

Due to the width of the roadway, CDOT reduced on-street parking on Milwaukee and is working with the community to increase parking opportunities on side streets where possible.

“This project balances roadway space to ensure pedestrians, transit users, bicyclists and motorists can travel along and across the street safely,” said Ald. Walter Burnett (27th).  “These improvements provide bicyclists with a safe and comfortable route, while making a key connection for all Chicagoans who commute to and from downtown.”

CDOT resurfaced much of the route using an asphalt mix that included a significant percentage of recycled material.  In the nearly 2,000 tons of material laid down, there was recycled rubber from 1,800 car tires, enough discarded roofing shingles to cover 30 homes and 15 truckloads of reclaimed asphalt pavement.

The Chicago Streets for Cycling Plan 2020 sets forth a strategy to achieve Mayor Emanuel’s goal of making Chicago the best big city for bicycling in America.   It calls for a 645-mile network of biking facilities to be in place by 2020 to provide a bicycle accommodation within half-mile of every Chicagoan.

Milwaukee is a “Spoke Route,” defined in the plan as 60 miles of direct routes in and out of the Loop that provide safe, continuous bikeways connecting all areas of Chicago with the downtown.  The primary goal of the Spoke Routes is to increase commuting by bicycle citywide.

Since 2005, Chicago has seen the number of people commuting to downtown via bicycle increased by 200 percent.   Today, there are nearly 20,000 people who commute daily on their bicycles.