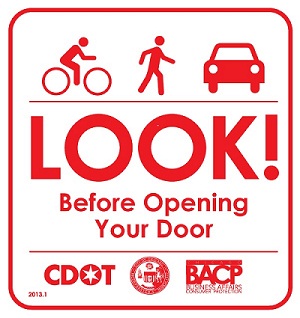 Mayor Rahm Emanuel introduced a plan to City Council to raise the fines for cyclists disobeying traffic laws, and double the fines for motorists who cause crashes by opening vehicle doors into the path of cyclists, commonly known as “dooring.”

The 2013 Bicycle Safety Ordinance proposal includes a provision to raise fines for cyclists who disobey traffic laws from $25 to a range of $50-$200, depending on the violation.

"If they are sharing the roadway with vehicles, cyclists need to obey all traffic laws, including yielding to pedestrians, stopping at traffic signals and indicating when they are making turns," Mayor Emanuel said. "When the traffic laws are obeyed, everyone is safer. By increasing the fines for failing to obey the law, cyclists will behave more responsibly, increasing safety and encouraging others to ride bikes."

The ordinance also includes provisions that bring the Chicago Municipal Code up-to-date to match the current bicycle safety laws of the State of Illinois.

Mayor Emanuel also today launched an awareness campaign for taxi passengers, reminding them to look before opening passenger doors for their safety, and the safety of pedestrians, bicyclists and drivers.  He announced that stickers will be placed on the rear passenger windows of all 7,000 Chicago taxicabs that say "Look! Before Opening Your Door."

"Taxicab drivers need to be aware of cyclists traveling near their vehicles, but their customers must also take the time to look before opening doors into traffic," Mayor Emanuel said. "These stickers will remind taxi customers to be more conscious of their surroundings before they exit the vehicle."

"Dooring" collisions occur when motorists or passengers open vehicle doors in the way of oncoming bicyclists, often causing injury.  There were more than 250 dooring crashes in Chicago last year.

The red, transparent "Look!" window stickers were designed by MINIMAL design studios, whose employee Neill Townsend was involved in a fatal "dooring" accident last year on the Near North Side as he rode his bike to work.

The “Look!” anti-dooring initiative will be managed by the Chicago Department of Transportation (CDOT) and the Department of Business Affairs and Consumer Protection (BACP).

Mayor Emanuel also proposed to City Council a plan to double the fines, from $500 to $1,000 for motorists who cause a dooring crash with a cyclist.  Fines for leaving a vehicle door open in traffic also would double from $150 to $300.

"We're glad to see these anti-dooring initiatives because, with more and more people riding bikes in Chicago, it is imperative that motorists look for oncoming cyclists before opening car doors," said Ron Burke, executive director of the Active Transportation Alliance, Chicagoland's bike, walk and transit advocacy organization.  "Too often we see people on foot, on bikes and driving cars traveling recklessly, which is why we support increased traffic fines as an important way to improve safety along with better education and infrastructure."