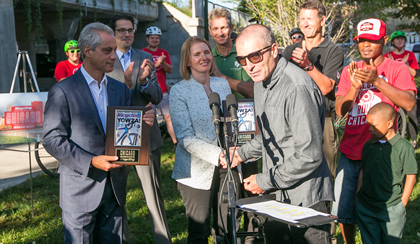 Mayor Rahm Emanuel accepted an award today from Bicycling magazine naming Chicago as America’s Best Bike City for 2016 because of its efforts to improve safety for cyclists and invest in bike infrastructure that reaches all corners of the city. The national publication also singled-out the extraordinary growth of Chicago’s Divvy system, which in a little more than three years has become the geographically largest bike share in North America.

“We are proud to be named by Bicycling magazine as Best City for Biking in America,” Mayor Emanuel said. “Our goal has been to make it easier and safer for everyone – no matter their age or ability – to get around on a bicycle, whether it’s for work, school, exercise or fun. If you live in Chicago, or are visiting and want to take advantage of our great Divvy system, we want everyone to feel comfortable biking in our great city.”

Chicago seized the title “Best Bike City in America” after being named number two behind New York in 2014.

The award was bestowed by the world’s largest cycling magazine at a ceremony along the 606, the popular elevated recreational trail that knits together four neighborhoods and was turned from a longtime dream into reality in partnership with the Emanuel administration.

“Chicago landed the title of Bicycling’s America’s Best Bike City 2016 because of its impressive efforts to keep riders safe and increase bike accessibility for cyclists, which have been led by Mayor Emanuel and Chicago Department of Transportation Commissioner Rebekah Scheinfeld and supported by dedicated activists and local businesses,” says Bicycling Editor-in-Chief Bill Strickland. “From promising to build 50 miles of low-stress bikeways -- paving the way to becoming the first major U.S. city with a downtown network of protected bike lanes -- to launching Divvy for Everyone, the top spot on our list was well deserved!”

“CDOT is thrilled to be named by Bicycling magazine as America’s Best City for Biking,” CDOT Commissioner Rebekah Scheinfeld said.  “Under Mayor Emanuel’s leadership, we’ve worked hard in recent years to build out our bikeway system so that biking is safer and more accessible for everyone in Chicago. We’ve also focused on expanding the Divvy system so it reaches more neighborhoods and is available to more Chicagoans through the Divvy for Everyone program.”

Scheinfeld noted that Chicago could not have achieved the top ranking without the support of advocates, such as the Active Transportation Alliance, and government funding partners, including the Illinois Department of Transportation and the Chicago Metropolitan Agency for Planning.

Divvy for Everyone (D4E) addresses financial barriers to Divvy membership by offering a one-time $5 annual membership to Chicagoans with income under 300 percent of the federal poverty level. Made possible through a grant from the Better Bike Share Partnership the support of Divvy’s exclusive system sponsor Blue Cross Blue Shield of Illinois, D4E has enrolled almost 1,700 members. For more information on the program, visit http://www.divvybikes.com/d4e.

Divvy, which turned three in June, has more than 34,000 annual members. Ridership is up 16 percent in 2016 and the system has logged more than 9 million total trips and almost 19 million miles since it was launched. This summer, the system completed its second major expansion, adding 85 new bike stations and pushing its boundaries to serve new neighborhoods focused on the south and west sides of the city. Divvy now has more than 580 stations and 5,800 bikes available. Stations within Chicago’s city limits serve nearly two-thirds of the city’s population and cover more than 100 square miles.

In 2016, CDOT plans to add and make improvements on 25 miles of bike lanes. Under Mayor Emanuel, Chicago has added more than 108 miles of protected bike lanes giving the City a total network of 292 miles of bikeways, including 245 miles of on-street bike lanes and 47 miles of off-street trails.

The number of Chicagoans riding their bikes to work is at an all-time high and growing faster than any other mode of transportation in the city. As CDOT expands and improves the city’s bikeway system, the department is working closely with aldermen and community groups on the south and west sides to ensure that the build-out serves all Chicagoans.

In creating the biennial ranking of America’s 50 Best Bike Cities for 2016, Bicycling Magazine, analyzed data from more than 100 U.S. cities, including the number of bicycle facilities, people per bike share, bicycle-friendly businesses and safety. The full ranking is available in the November/December issue, on newsstands beginning October 11.

The online slideshow features details on each city’s ranking, including advice from locals on best places to bike, participate in an organized ride and locations to eat! For more details: www.bicycling.com/bestcities16.