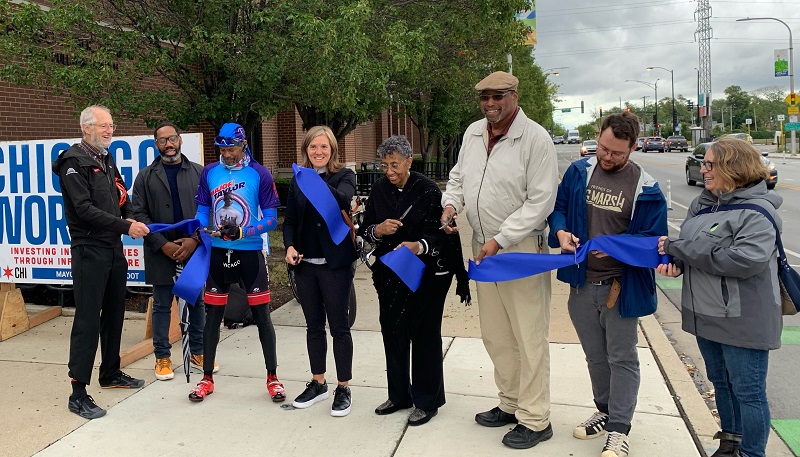 CHICAGO - The Chicago Department of Transportation (CDOT) announced today that it is in the midst of the biggest bike lane expansion in the City’s history, due to targeted investments from Mayor Lori E. Lightfoot’s Chicago Works capital plan. With a total of $17 million in new funding this year and next, CDOT is installing 100 miles of new and upgraded bike lanes. CDOT Commissioner Gia Biagi made the announcement at the location of new protected bike lane on 119th Street. Biagi also released a blueprint for building more bikeways that puts an emphasis on community-led planning and connected neighborhood networks.

"Investing in bike infrastructure is not only a critical part of our plan to build stronger, more resilient neighborhoods, but also our efforts to protect the health and wellbeing of our residents," said Mayor Lightfoot. "By building more bike lanes than ever, we will help to bring Chicago back from the disruptions caused by the pandemic as well as encourage more residents to ride bikes—thus creating healthier, better-connected communities."

“Our goal at CDOT is to make every day cycling safe, affordable and convenient for people of all ages and abilities, by connecting people to meaningful destinations and connecting neighborhoods to each other,” said Commissioner Biagi. “But there is no one-size fits all approach to growing our bike network. Every neighborhood has different opportunities, challenges, and perceptions of biking. This means different strategies are required for different neighborhoods.”

CDOT also released a new document, the Chicago Community Cycling Network Update, which includes a summary of 2021 initiatives that are funded through the Mayor’s Chicago Works plan. It outlines an approach for expanding bike infrastructure with a focus on new protected bike lanes, working with community stakeholders on building Neighborhood Bike Networks, and filling gaps in the citywide network. The design and implementation strategy builds on CDOT’s new Strategic Plan for Transportation which prioritizes equitable access to safe and affordable transportation options as a key strategy to support economic development and build healthier, cleaner, and safer communities.

Between the Great Recession and the start of the Covid-19 pandemic, interest in biking increased steadily and the number of people biking to work almost doubled. Now, partly in response to the pandemic and the desire for safe and socially distanced forms of transportation and recreation, the trend has accelerated, and more Chicagoans are biking than ever. CDOT’s Divvy bikeshare system has recorded over 7 million rides in the last two years. This includes setting a new single-day ride records three times this year and set new monthly records in July and August with more than 800,000 rides each month. Additionally, Divvy is on pace to top the old annual ride record of 3.8 million in the coming days.

Commissioner Biagi said that with a new dedicated source of funding through Mayor Lightfoot’s Chicago Works infrastructure investment program, CDOT is on track to grow the existing bike network to about 400 miles by implementing 50 miles of projects in 2021, with 50 additional miles in 2022. These 100 miles of new and upgraded bike lanes is the largest growth in the City’s biking system ever over a two-year period. This year’s bike infrastructure includes a focus on the South and West Sides and is being coordinated with the ongoing citywide expansion of Divvy. The bike share system is expanding its service to those areas and adding an additional 3,500 electric assist bikes to Chicago’s streets this summer, on top of the 3,500 e-bikes deployed in the first phase of the expansion in 2020.

CDOT bikeway planners have been conducting virtual and in-person outreach and engagement sessions with community transportation advocates this spring and summer. CDOT has begun installing 45 miles of connected neighborhood bike networks in Austin, Belmont Cragin, and North Lawndale this year and next, all areas that are the focus of the Divvy expansion. Building on the expansion of bikeways that started in 2020, CDOT is also installing 13 additional miles of bikeways on the Far South Side.

Biking to work has been a long-standing metric for measuring progress in making cities more bicycle-friendly. However, in order to encourage more people to shift from cars to bikes, CDOT is focusing on making short everyday trips easier by creating networks of bike infrastructure within neighborhoods.

“People of all ages and abilities get excited about biking when they are physically protected from car and truck traffic,” Amy Rynell, executive director of the Active Transportation Alliance. “This new bike lane in West Pullman makes it safer and easier for residents to access jobs, open space, and other daily destinations. Dozens of streets in neighborhoods throughout the city could benefit from similar upgrades.”

"The pandemic year really brought people back to cycling and our trail and bike lanes have been well used," said Peter Taylor President of the Friends of the Major Taylor Trail. "The Major Taylor Cycling Club is growing and every week I remark on how far the citywide cycling network has progressed in a couple of years.  More and better infrastructure is key. CDOT has been doing the work, creating more connections to the Major Taylor Trail and making it safer to ride around. Safe streets are integral to expanding the active lifestyle."

Following are a number of the protected bike lanes that have been installed or will be completed this year:

Taylor Street – Morgan to Canal:  Filling a network gap between UIC and Downtown with connections to bikeways on Halsted, Desplaines, Clinton, and Canal.

To download the Chicago Cycling Network Update and learn more about the Chicago’s bike program, go to: www.Chicago.gov/bikes.