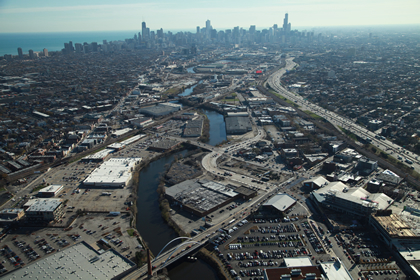 CHICAGO – Mayor Rahm Emanuel today announced that a brand new realigned section of Elston Avenue has opened, eliminating tie-ups that plagued the six-way intersection at Damen, Elston and Fullerton for years. The opening of the new roadway represents a major milestone for the project that will be continuing through spring of 2017.

“Damen, Elston, and Fullerton used to be one of Chicago's most dangerous and most congested intersections, one that drivers would try to avoid at all costs,” Mayor Emanuel said. “Now with the fully opened, new intersection at Elston and Fullerton, traffic is flowing more smoothly and drivers can actually get through on a single traffic light.”

The realigned section of Elston creates separate intersections for both Fullerton and Elston, and Damen and Elston.   The new traffic pattern is already relieving congestion and improving safety at one of the city’s historically most crash-prone intersections.

The project provides two through lanes for vehicle traffic and protected bike lanes in both directions on the new stretch of Elston.  It will also include the resurfacing of all streets within the project limits, will widen Damen to improve traffic flow and better accommodate bikes, and will also widen the north sidewalk along Fullerton.

“More than 70,000 vehicles pass through this intersection each day, and at peak travel times it causes major inconvenience for motorists as well as pedestrians and bicyclists,” Chicago Department of Transportation (CDOT) Commissioner Rebekah Scheinfeld said. “We’ve come up with a creative solution that has rerouted Elston and synchronized traffic signals to relieve congestion, improving safety for everyone who travels through the area.”

The old section of Elston south of Fullerton will be renamed N. Elston Court and will be reconstructed with access at Fullerton. The project is also creating the opportunity for commercial development on both the north side and the south side of Fullerton east of Damen.

Construction of the Damen, Fullerton intersection will continue into the spring of 2017. While there will be intermittent lane reductions starting again in the spring, both Fullerton and Damen will have two lanes open in each direction throughout the winter.

Additional work to be completed in the spring includes the installation of permanent traffic signals at all intersections, new street lighting on Fullerton and Damen, and completion of the full reconstruction of Elston Court from Fullerton to the project’s south limit at the new section of Elston.

The $22.5 million construction cost is paid for through federal, state and TIF funds, and managed by CDOT in coordination with the Illinois Department of Transportation.