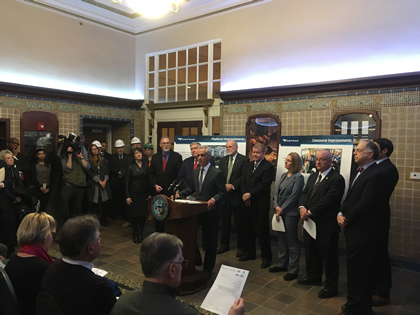 CHICAGO – The City of Chicago’s ambitious plans to modernize and transform Chicago Union Station and the surrounding West Loop area received a major boost today with the announcement by Mayor Rahm Emanuel, Amtrak, Metra and the RTA that the U.S. Department of Transportation (USDOT) Build America Bureau and the City of Chicago are entering into an Emerging Projects Agreement (EmPA), under which Chicago can work closely with USDOT with the ultimate goal of seeking up to $1 billion in federal funding for the project.

“Today marks a major step forward both in the future of Union Station, and in the economic life of our city,” Mayor Rahm Emanuel said. “This modernization effort will improve the experience for everyone who travels through Union Station and tap the potential that the station has to serve as an anchor for further economic development of the West Loop and surrounding neighborhoods. I want to thank Secretary Foxx and the Build America Bureau for acknowledging the significance of this project and for all of our partners who have been working for the past several years to help get us to this point today.”

Union Station to move forward. This project will serve as a vital hub for rail and transit and connect the entire region,” said Secretary of Transportation Anthony Foxx. “I’m confident that the Bureau will continue to be a great partner for Chicago and cities across the country to build seamless, modern transportation networks in the years ahead.”

“Union Station is a key transportation hub and vital economic driver for the City of Chicago and region. Yet, for too long the station has been operating at or near capacity, threatening its ability to sustain ridership and economic growth,” U.S. Senator Dick Durbin said. “The Emerging Project Agreement announced today moves us closer to a 21st century Union Station – one with an improved passenger experience and less congestion. I’m pleased to see Chicago, Amtrak, and Metra working together to ensure this project succeeds, and I will continue to provide federal support for improvements that will impact commuters and visitors for decades to come.”

“Union Station’s master plan and surrounding commercial development will play a critical role in increasing capacity, efficiency, and accessibility, while reinforcing Chicago’s place as an important regional and national crossroads,” said Rep. Quigley, who serves on the Appropriations Subcommittee on Transportation, Housing, and Urban Development. “I applaud today’s announcement that confirms the Department of Transportation’s commitment to the rehabilitation of Union Station, and I look forward to working in Congress to ensure DOT has the resources it needs to properly assist in the planning of the Redevelopment project, which will spur increased economic activity in the region.”

“This is another milestone in all of our efforts to improve Union Station to make it a world-class transportation facility for a world-class city,” said Ray Lang, Amtrak Senior Director, National State Relations. “All of this is happening because all of us are working together as partners.”

The EmPA allows USDOT to offer enhanced technical assistance on complex, large scale projects seeking low-cost federal credit through the Build America Bureau’s innovative programs, including TIFIA (Transportation Infrastructure Finance and Innovation Act) Program and RRIF (Railroad Rehabilitation and Improvement Financing). TIFIA has provided more than $26 billion in credit assistance around the country, including loans for the CTA and Chicago’s acclaimed Riverwalk; RRIF has provided $5 billion in loans for projects around the country.

The EmPA announcement comes as the City and the Chicago Department of Transportation (CDOT) are working with Amtrak, Metra, the RTA and the Illinois Department of Transportation on the design of near term improvements that will upgrade passenger capacity by renovating and expanding the concourse and platforms. Also addressed in a Master Plan process are service, safety/environmental, accessibility and mobility issues around the station. Amtrak is also in the final stages of evaluating proposals for a Master Developer to lead the redevelopment of Union Station and surrounding Amtrak-owned property and air rights.

The Union Station Redevelopment plans envision a public-private partnership to

implement both transportation-related improvements as well as transit-oriented developments surrounding the station. The three main goals are:

1. To expand and renovate the station to be an architecturally significant transportation terminal that both preserves and builds upon its existing architectural heritage.

2. To allow a growing number of passengers and other visitors to use the station facilities in the most efficient, safe, and pleasant manner possible.

3. To create a vibrant commercial center and civic asset that welcomes and serves travelers, neighborhood residents, and downtown workers alike, while further enhancing the economic vitality of the City of Chicago and the region.

Among the improvements that could be funded under the agreement are the following:

* Rehabilitation of the Great Hall skylight and dome structure.

* Renovation and expansion of the Adams Street and Jackson Street entrances.

* Expansion of the Union Station Concourse.

* Improvement of ADA accessibility throughout the station, including installation of an elevator at the Canal Street Headhouse.

* Reconstruction of the Canal Street and Harrison Street viaducts.

* Transit-oriented development, including commercial/residential development of the air rights over the Headhouse and commercial/office/retail uses surrounding Union Station.

“CDOT is looking forward to working with USDOT to line up financing for this critically important project,” CDOT Commissioner Rebekah Scheinfeld said. “The EmPA Agreement is another example of how the administration of Mayor Emanuel is using all the means at our disposal to fund the type of infrastructure improvements that are needed to keep Chicago’s economy moving AND thriving in the 21st Century.”

“Metra is excited by this important step in the redevelopment of Chicago Union Station,” said Metra Executive Director/CEO Don Orseno. “This Emerging Project Agreement puts the

redevelopment of the station in position for financing opportunities that could allow the work to proceed more quickly and at a lower cost. These improvements will provide relief to the 55,000 Metra riders who use Union Station each weekday and allow the station to accommodate growth in the future.”

“I understand the critical nature of work on Union Station as both RTA Chairman and as a rider,” said RTA Chairman Kirk Dillard. “I take Metra in and out of Union Station daily so I understand its importance as a key transit site for regional riders. We are pleased this agreement will help restore this iconic building to its former glory and to assure the safety and comfort of our customers and tourists. Chicago is the nation's transportation center and Union Station is a vital, major and symbolic piece of America's infrastructure". Chicago Union Station (CUS) handles more than 300 trains per weekday carrying approximately 120,000 arriving and departing passengers, a level of passenger traffic that would rank it among the busiest airports in the nation.

CUS is a hub of the Amtrak national network, handling most of its long-distance trains, and more than 30 regional trains sponsored by state transportation departments. In addition to Amtrak service, Metra operates six commuter rail routes with 271 weekday arrivals or departures from Chicago Union Station. The station operates at or near capacity during peak periods, threatening its ability to sustain ridership and economic growth.

Amtrak – America’s Railroad® – is dedicated to safe and reliable mobility as the nation’s intercity passenger rail service provider and its high-speed rail operator. With our state and commuter partners, we move people, the economy and the nation forward, carrying more than 30 million Amtrak passengers for each of the past six years. Formally known as the National Railroad Passenger Corporation, Amtrak is governed by a 10-member board of directors, nine of whom are appointed by the President of the United States plus the Amtrak CEO. Anthony R. Coscia is board chairman and Jeffrey R. Moreland is vice chairman. Amtrak operates more than 300 trains daily – at speeds up to 150 mph (241 kph) – connecting more than 500 destinations in 46 states, the District of Columbia and three Canadian Provinces. Learn more at Amtrak.com or call 800-USA-RAIL for schedules, fares and other information. Check us out at blog.Amtrak.com, Like us on Facebook.com and Follow us on Twitter @Amtrak.

About the City of Chicago Department of Transportation

The Chicago Department of Transportation’s mission is to keep the city’s surface transportation networks and public way safe for users, environmentally sustainable, in a state of good repair and attractive, so that its diverse residents, businesses and guests all enjoy a variety of quality transportation options, regardless of ability or destination. CDOT’s vision is to ensure that Chicago continues to be a vibrant international city, successfully competing in the global economy with a transportation system that provides high-quality service to residents, businesses, and visitors – a system that offers a solid foundation for the city, regional and national economies, yet is sensitive to its communities and environment.

About the Build America Bureau:

The Build America Bureau (the “Bureau”) is located within the U. S. Department of Transportation. It is responsible for driving transportation infrastructure development projects in the United States. The Bureau streamlines credit opportunities and grants and provides access to the credit and grant programs with more speed and transparency, while also providing technical assistance and encouraging innovative best practices in project planning, financing, delivery, and monitoring. To achieve this vision, the Bureau draws upon the full resources of U.S. DOT to best utilize the expertise of all the operating administrations within the Department while promoting a culture of innovation and customer service. One of the tools the Bureau has available is the Emerging Projects Agreement, which can provide high-priority projects in the early stages of development with technical assistance in development and planning.

Metra is one of the largest and most complex commuter rail systems in North America, serving Cook, DuPage, Will, Lake, Kane and McHenry counties in Northeastern Illinois. The agency provides service to and from downtown Chicago with 241 stations over 11 routes totaling nearly 500 route miles and approximately 1,200 miles of track. Metra operates more than 700 weekday trains, providing about 300,000 passenger trips each weekday.

The Regional Transportation Authority (RTA) is the only transit agency charged with regional financial oversight, funding, and transit planning for the Chicago Transit Authority (CTA), Metra and Pace bus and paratransit. Riders take more than two million trips each weekday on the RTA region’s transit system in six counties with 7,200 transit route miles throughout Northeastern Illinois. The agency also provides customer services including online and telephone travel planning assistance and travel training for seniors and people with disabilities. For more information, visit www.RTAchicago.org.