The Prestigious Urban Design Award Sponsored by Bruner Foundation Comes with a $10,000 Prize 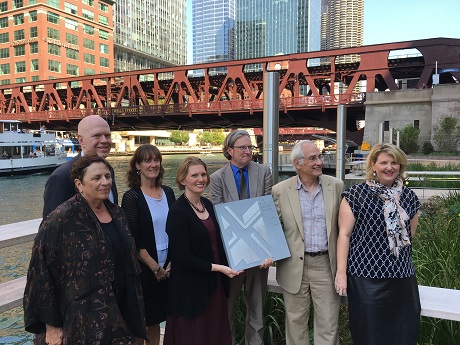 Mayor Rahm Emanuel announced the City of Chicago today received a prestigious national honor for the City’s acclaimed Riverwalk Project, a Silver Medal for the 2017 Rudy Bruner Award for Urban Excellence. The biennial design award recognizes transformative places that contribute to the economic, environmental and social vitality of American cities.

In presenting the award in a ceremony at the Riverwalk today, Simeon Bruner, the founder of the award named after his father, said; "The Chicago Riverwalk is a wonderful example of the transformative power of visionary public leadership and investment in the urban infrastructure of our cities."  The award sponsored by the Cambridge, MA-based Bruner Foundation, is the 18th major honor for the Riverwalk project, the final two phases of which were constructed from 2013 to 2016. (See below for full list of awards.)

“The City of Chicago can take pride in this national recognition for the Chicago Riverwalk, a transformative project that has reshaped the way people interact with the Chicago River,” Mayor Emanuel said.  “By creating the Riverwalk and making investments on the South and North Branches of the river we are building on Daniel Burnham’s vision and turning the waterfront into a magnet for both recreational opportunities and economic growth.”

“The Chicago Department of Transportation (CDOT) is honored to have led the outstanding team that helped realize the vision for Chicago’s downtown river front first imagined by Daniel Burnham,” said  CDOT Commissioner Rebekah Scheinfeld. “The Riverwalk is part of a Mayor’s Emanuel’s larger city-wide initiative to ‘Build on Burnham’ and develop dynamic green spaces along Chicago’s waterfront throughout the city, helping to create more vibrant neighborhoods and keep Chicago competitive as a beautiful, world class destination.”

“The Department of Fleet and Facility Management (2FM) is proud to maintain the Chicago Riverwalk as one of City’s great public amenities allowing access to the Chicago River in the urban canyon of downtown Chicago,” 2FM Commissioner David Reynolds said. “The Rudy Bruner prize is important recognition of the many people who put tremendous effort in the project for the enjoyment of Chicago’s residents and visitors.”

Construction of the Riverwalk was led by CDOT and the riverfront esplanade is managed by 2FM. The award also recognized the key support for the project by environmental advocacy group, Friends of the Chicago River.

The Rudy Bruner medalists are chosen by a nationwide committee of urban experts through an in-depth evaluation process involving input from the award application, site visits, interviews with project participants and community members, and committee discussions.

The Rudy Bruner Gold Medal went to the SteelStacks Arts and Cultural Campus, at the site of a reclaimed steel mill in Bethlehem, PA.  The City plans to use the $10,000 in prize money that comes with the Silver Medal for ecological programming.

In March of this year, Mayor Emanuel announced that the City is looking to build on the success of the Riverwalk and other riverfront investments through the Chicago Urban River Edges Ideas Lab which is engaging select architectural firms with experience in designing award-winning riverfronts, parks and public spaces to develop design concepts that will lead to a unified design aesthetic for Chicago’s riverfront.

The results of the Ideas Lab were unveiled yesterday in coordination with the launch of the 2017 Chicago Architecture Biennial. The Ideas Lab is a collaboration funded by The Richard H. Driehaus Foundation and Comcast and involves the Chicago Department of Planning and Development (DPD) and the Metropolitan Planning Council (MPC).

The three newest sections, or “rooms,” of the Riverwalk were completed in October of 2016 and include:

The first three rooms opened in May of 2015 and extended the Riverwalk from its terminus at the Vietnam Veterans Memorial at State Street. They include:

The six-block section of the Riverwalk was designed by a team of architects including Sasaki and Ross Barney Architects and was constructed by Alfred Benesch & Co. Engineers and Walsh Construction. The project was funded through the U.S. Department of Transportation’s Transportation Infrastructure Finance Innovation Act (TIFIA) program which provided a loan of $98 million. Additionally, the project received $10 million in state funding. For more information on the Chicago Riverwalk, please visit
www.chicagoriverwalk.us.

For more information about the 2017 Rudy Bruner awards, go to:  http://www.rudybruneraward.org/blog/announcing-2017-rudy-bruner-award-medalists/

Awards for the Chicago Riverwalk