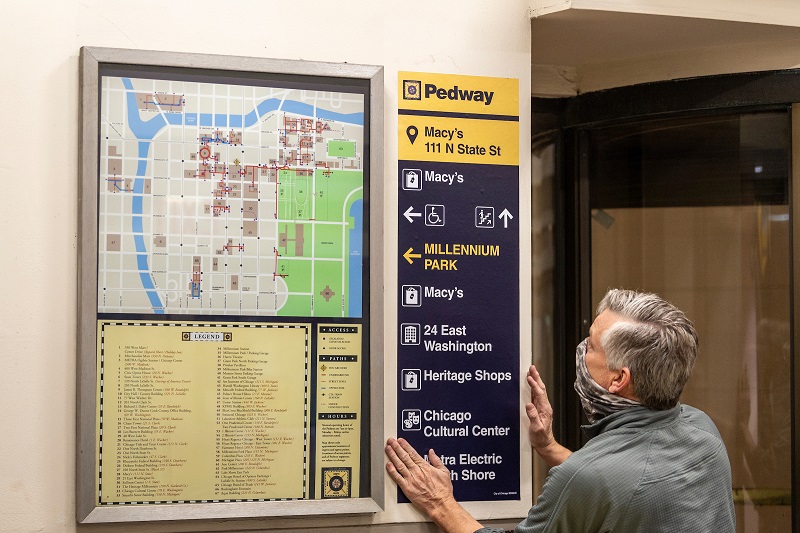 CHICAGO - The City of Chicago announced today it is upgrading signage in the Downtown Pedway, the first step in a comprehensive program to improve the wayfinding for the system of underground tunnels that is used by tens of thousands of pedestrians each day during the winter season. The new interim signage is being installed in the Pedway’s “main stem,” the most heavily travelled segment that runs under and along Randolph Street and connects City Hall, Daley Plaza and the Thompson Center to the CTA Blue and Red Lines and Metra’s Millennium Station. The Pedway was closed last winter during the pandemic but was re-opened this summer and remains a convenient and comfortable downtown travel option as winter weather returns.

The new interim signage is the first step in a longer-term comprehensive wayfinding project to make it easier for people to navigate the Pedway. The Chicago Department of Transportation (CDOT) and Department of Assets, Information and Services (AIS) are working on these upgrades with a number of downtown and transportation stakeholders, including the Environmental Law & Policy Center (ELPC), the Chicago Loop Alliance, the Chicago Transit Authority, Metra, the Regional Transportation Authority, and various property owners along the Pedway. The full Pedway is a system of underground tunnels and overhead bridges that provide a weather-protected pedestrian connection covering more than 40 blocks and 50 public and private buildings in the Central Business District.

“The Pedway is a great way for people to navigate downtown, especially during inclement weather,” CDOT Commissioner Gia Biagi said. “The new signage is the first step toward long term improvements in the Pedway that will make it easier for people to find their destinations, whether for shopping, tourism, transit, work, or heading home.”

“The new Pedway signage will help Chicagoans and visitors alike navigate and more easily use the Loop’s underground walkway system that has been an underutilized Chicago asset for too long.  This is a key step toward revitalizing the Pedway,” said Howard Learner, ELPC Executive Director. “ELPC Senior Policy Advocate MeLena Hessel has worked hard alongside the CDOT team and other stakeholders to turn the vision of Pedway signage into a reality. This initiative, plus lively new mural art and future improvements will attract more people to use the Pedway as a connector between CTA, Metra trains and Loop offices and businesses – just in time for winter.”

“Chicago Loop Alliance has programmed the Pedway with public art, performances and events for years in an effort to draw awareness to what a great asset it is to our community—especially during our infamous winters,” said Chicago Loop Alliance President and CEO Michael Edwards. “We’re thrilled to see this interim signage installed and look forward to long-term wayfinding improvements. These efforts will make the Pedway more accessible and navigable for all.”

The ELPC has been a steadfast advocate for improvements to the Pedway and supported a recent successful CDOT application for federal funding to carry out a comprehensive Pedway wayfinding modernization program. This effort will retain a team of wayfinding specialists to develop and implement a new system-wide signage and information plan in the coming years in cooperation with the many owners of buildings that can be reached by the network of pedestrian passageways.

Click here for more information and a system map of the Pedway.