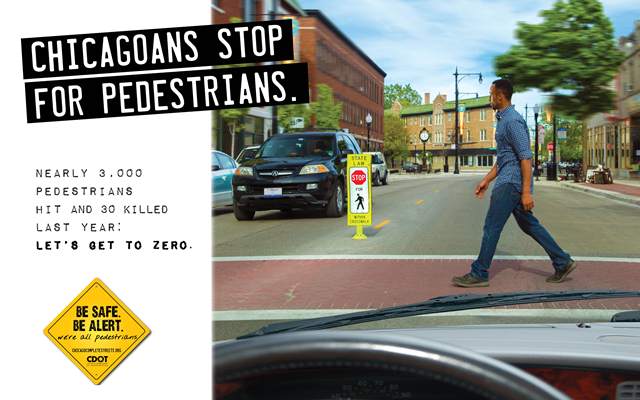 The Chicago Department of Transportation (CDOT) and the Chicago Police Department today launched the 2014 pedestrian safety campaign with the goal of increasing safety, reducing pedestrian and vehicle conflicts, and making Chicago a healthier, more livable city.

The campaign includes public service messages in CTA buses, on bus shelters and other street furniture across the city, with images reminding motorists to stop for pedestrians in the crosswalk.

Roughly 3,000 pedestrians are hit by motor vehicles in Chicago annually, resulting in an average of 30 deaths each year. CDOT’s goal is to reduce serious pedestrian injuries by 50 percent every five years and eliminate pedestrian fatalities within ten years.

“Even one life lost is too many, and we must take action to promote pedestrian safety in multiple ways,” said CDOT Commissioner Rebekah Scheinfeld. “Education, engineering and enforcement are critical components to ensure that pedestrians and motorists understand their role and responsibility in public safety.”

The campaign also includes the Chicago Police crosswalk awareness initiatives, which involve an undercover police officer posing as a pedestrian crossing at a crosswalk. If oncoming drivers don’t stop for the pedestrian—as required by law—the vehicle will be pulled over by a police spotter further down the street.

CDOT continues to install numerous safety-related improvements throughout the city, including traffic-calming installations such as speed humps and curb bumpouts to slow vehicles, as well as pedestrian-countdown signals that tell pedestrians how much time they have to cross the street.