Starting this weekend, additional crews deployed throughout the city to repair roads and patch potholes during the months of September and October 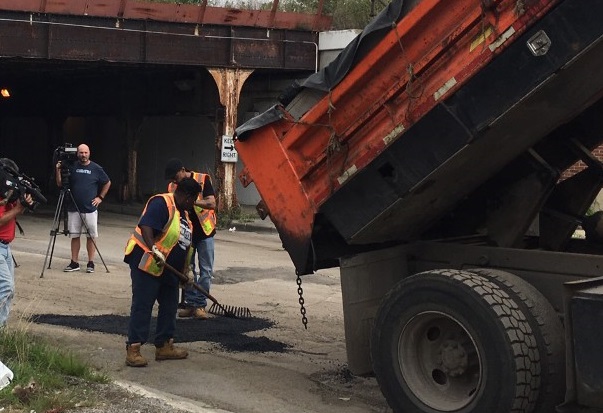 CHICAGO—Mayor Lori E. Lightfoot and the Chicago Department of Transportation (CDOT) today announced expanded efforts to repair roadways with pothole blitzes beginning throughout the neighborhoods this weekend, September 7th. The fall pothole blitz program will assign additional crews for road repair duties on Saturdays throughout September and October, and marks an expansion of high-quality, neighborhood services provided by the City to maintain its neighborhood streets and major roadways all year long.

“As the summer season draws to a close, the City is working round-the-clock to fill potholes, as well as fix curbs, repave roads, and much more,” said Mayor Lightfoot. “Ensuring our neighborhoods receive the services and investments they need is critical to improving our residents’ quality of life, and I applaud our dedicated City workers for doing everything they can to keep our streets safe and our city moving forward.”

These additional services come after CDOT has worked throughout the summer to begin preparing Chicago’s streets for the coming winter. This year to date, CDOT has filled nearly 527,000 potholes throughout the city’s 50 wards and will greatly expand upon this current number with the Blitz Days.

“We are pleased to be scheduling a series of pothole patching and street resurfacing Blitz Days throughout the fall months” said acting CDOT Commissioner Tom Carney. “We anticipate having about 30 pothole patching crews assigned to wards throughout the city. With this additional help, we estimate that we will be able to fill more than 5,000 potholes on each of these days.”

CDOT is urging the public to help identify street and alley locations that need the attention of pothole patching crews. City residents can report potholes through one of the following three methods:

“These improvements are just one of many ways we are working to ensure that Chicago's transportation meets and exceeds the expectations of our residents,” said Alderman Howard Brookins, Chairman of the Committee on Transportation and Public Way. “And, I would like to thank the dedicated City workers for spending their weekends repairing our roads. ”

The City asks motorists to reduce speeds and use caution when driving past CDOT crews working in streets and alleys in the coming months.