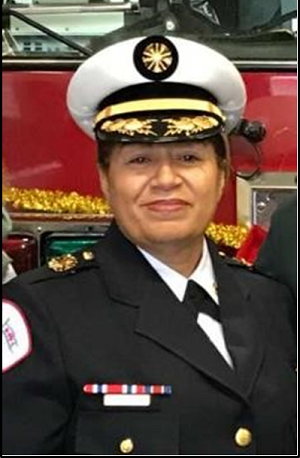 Fire Commissioner Annette Nance-Holt is a 31-year veteran of the Chicago Fire Department (CFD).  She is responsible for the day-to-day operational and administrative oversight of the country’s second largest fire department.

Commissioner Nance-Holt is committed to life safety and protection of property for all residents and visitors of Chicago, in addition to the safety and continuing education for all CFD members.  She is acutely aware of the importance of training and preparedness and works with many external groups and organizations to ensure that Chicago is as prepared as any metropolitan city can be. Commissioner Nance-Holt is committed to having a membership that mirrors the communities it serves, and for the Department to be an inclusive work environment for all members

Commissioner Nance-Holt was mainly raised in the Maple Park community on the south side of Chicago and attended both parochial and public schools.  She learned responsibility at an early age, having worked at the family-owned grocery store on the south and west sides of Chicago.  While studying and working full time, she obtained a Bachelor of Arts degree from Chicago State University, and later  obtained a Master’s in Public Administration in Fire and Emergency Services  from Anna Maria College.

Prior to joining the CFD, Commissioner Nance-Holt worked in the private sector for eight  years.