The City of Chicago is currently in Phase Four: "Gradually Resume." Many City services have adjusted hours or locations and may require health screens prior to entering their physical spaces. Please call ahead or visit any department's website to get additional details, or visit chicago.gov/covid-19.

We serve the City of Chicago and its residents by providing a broad range of legal services with a commitment to professionalism, diversity and the responsible use of taxpayer dollars, supporting the Administration’s goals to be transparent, just and equitable 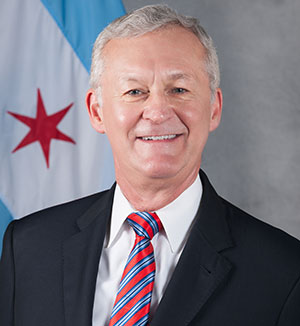 Mark A. Flessner is the Corporation Counsel for the city of Chicago.  He is a Chicago trial attorney with more than three decades of professional legal experience and most recently served as Partner at the firm Holland & Knight.

Mr. Flessner has donated significant legal time to pro bono activities and was the pro bono partner for Holland & Knight’s Chicago office. He was a lead attorney on a death penalty habeas corpus petition in Alabama and on a high-profile immigration case in Chicago. He also served as a member of the Federal Defender Panel in the Northern District of Illinois, providing legal representation to the indigent.

University of Illinois at Urbana-Champaign, B.A.,

Illinois and the Chicago Chapter of the Federal Bar Association