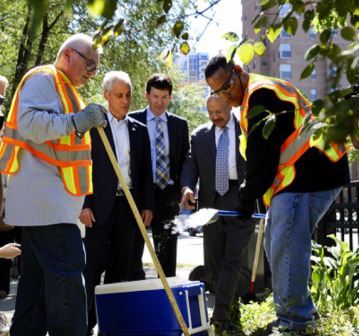 Mayor Rahm Emanuel and the Chicago Department of Streets and Sanitation (DSS) today announced a new pilot program that uses dry ice to combat rodents. Crews will evaluate variables like storage and longevity, overall success rates and potential cost saving to determine whether the product could become a permanent tool for the Bureau of Rodent Control.

“This pilot program is one more way we are working to improve our neighborhoods and the quality of life for all Chicagoans,” said Mayor Emanuel. “Investments in our city services are the cornerstones that help make our communities stronger and move the City of Chicago forward.”

Crews wearing protective gloves place a spoonful of the dry ice directly into a rodent burrow and cover the hole. As the dry ice melts it turns into carbon dioxide, suffocating the rodents.

“We are continuously looking for new and innovate ways to provide the best service for the resident of Chicago,” said DSS Commissioner Charles L. Williams. “Dry ice is an alternative that cities have been experimenting with and achieving tremendous success. And we are excited to evaluate its effectiveness here in Chicago to determine if it could be an added tool in our arsenal against rodents.”

The Bureau of Rodent Control will continue testing the dry ice into late fall, weather permitting, and conclude on the results in spring 2017. Preliminary results indicate a reduction of more than 60 percent after treating an area with dry ice.

This is the latest step in a series of enhancements DSS has undertaken to help combat rodents in Chicago. In April, DSS redirected 10 crews to the Bureau of Rodent Control. The new crews have been able to complete approximately 41 percent more rodent abatement over last year; increase preventive re-baiting by 22 percent; and begin working toward the goal of ensuring all requests are addressed within five days of receipt.

In 2016, the DSS continued enforcing the "Construction Site - Rodent Abatement Ordinance" that mandates a rodent abatement plan be maintained throughout the excavation process of any new construction within City limits.

Education remains a top priority. New informational posters are being placed at every baiting location to help residents understand how to eliminate food sources for rodents.