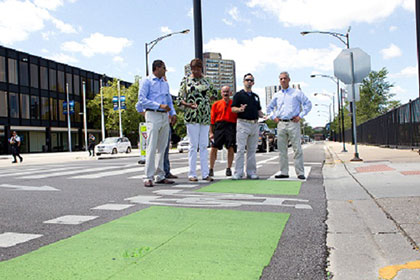 Mayor Rahm Emanuel announced today that the City is building more than 30 miles of new bicycle lanes in neighborhoods across Chicago this year, part of a planned nearly 650-mile network of biking facilities to be in place by 2020 to provide a bicycle accommodation within half-mile of every Chicagoan.

“Improving our bicycling facilities is critical to creating the quality of life in Chicago that will attract businesses and families to the city,” Mayor Emanuel said. “Our plan lays the framework for Chicago to be the most bike friendly city in the United States and will create economic opportunity and jobs in our neighborhoods and throughout the city.”

Chicago’s Streets for Cycling Plan 2020, to be released later this month, sets forth a strategy to achieve Mayor Emanuel’s goal of making Chicago the best big city for bicycling in America.  The Plan, developed through a community process, identifies a 645-mile bike network of on-street bikeways that will allow all Chicagoans to feel more safe and comfortable riding on city streets.

By the end of this year, the Chicago Department of Transportation (CDOT) will install 34 miles of new bike facilities, including:

The Streets for Cycling Plan 2020 identifies three kinds of bicycle routes that will form the network: