The Chicago Department of Transportation (CDOT) initiated the River North-Streeterville Transit Study (RNS) in spring 2014. The purpose of this study is to develop transit alternatives that will improve access and mobility between the West Loop and River North and Streeterville neighborhoods. The River North-Streeterville area sees a high number of workers, tourists and residents coming to and from the area on weekdays and weekends. The need for improved transportation access to and within this area, particularly from the West Loop train stations, has been recognized for many years. The RNS Transit Study aims to satisfy this need by utilizing data, analysis, surveys and other information to create and identify potential transit alternatives.

This project examines the travel markets and preferences in the River North Streeterville area; physical and traffic constraints; and other benefits, costs, and impacts of different transit improvements.

The need for improved transportation in this area has been recognized for several years in the River North-Streeterville area. The River North-Streeterville Transit Alternatives Study aims to satisfy this need by utilizing data, analysis, surveys and other information to create and identify transit alternatives. CDOT will use the results of this study to inform decision-making over the next several years.

This study is supported by data and information from a variety of critical sources:

· Additional data such as past surveys of travel patterns from CDOT and other regional agencies; traffic data; census data; and roadway physical design data.

The design of the study will lay the groundwork for requesting funds in the future. 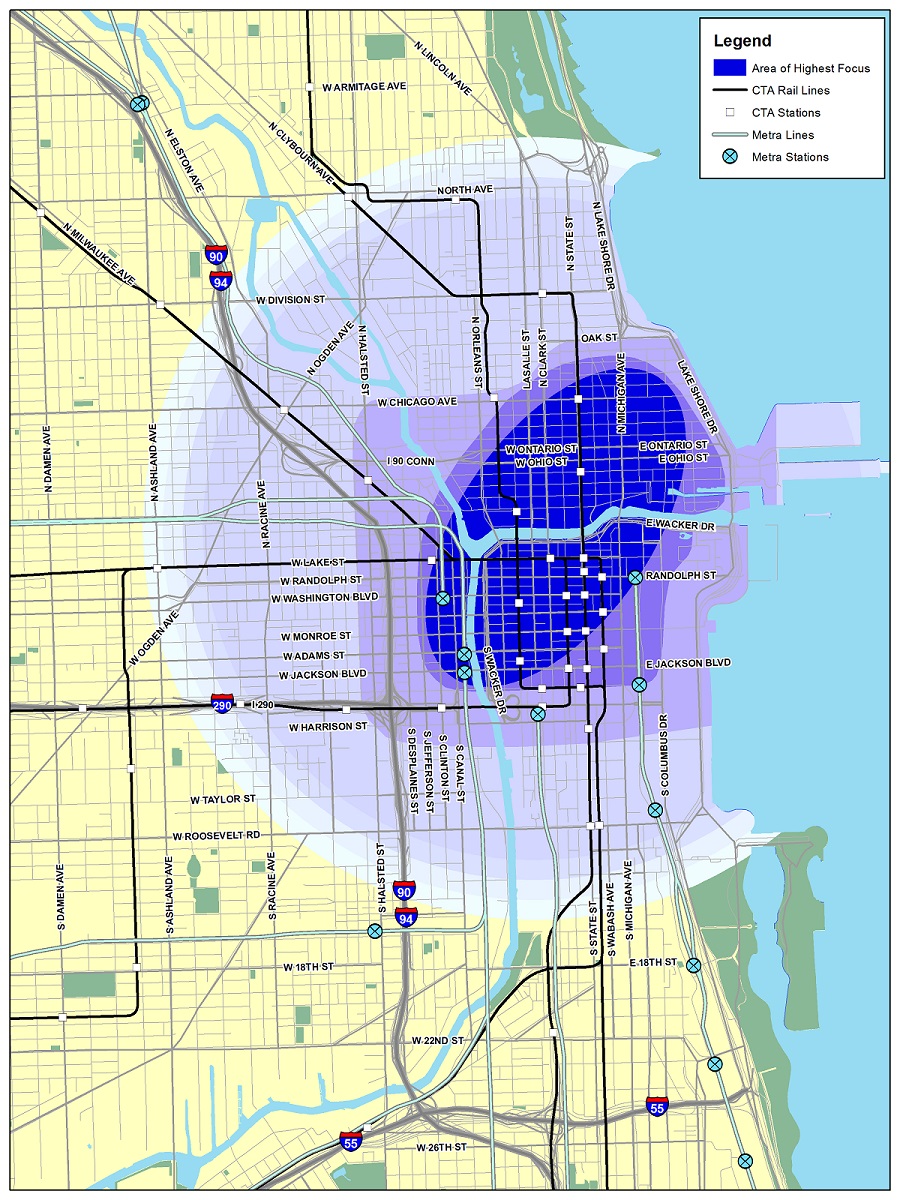 The River North-Streeterville Transit Study Public Meeting was held on August 13, 2014 at the Loyola Lewis Towers (Streeterville campus) from 4:00 pm to 7:00 pm. A total of 37 members of the public attended the meeting, in addition to 4 members of the media and 12 Technical Advisory Committee members as well as staff representatives. A PowerPoint presentation about the study played on a loop every 10 minutes and project exhibits providing background information were available for review. Attendees provided feedback through several activities around the room. These activities included a set of maps that allowed people to place dots for their typical origins and destinations; a map that allowed the public to comment upon potential ‘good’ and ‘fair’ corridors suitable for improved transit within the study area; and both an electronic employee and resident survey on several available laptops. Study staff and members of the study’s Technical Advisory Committee (TAC) were also available to answer questions.

Comments were collected in a variety of forms at the public meeting. In addition to the two map activities, attendees also had the option to submit general comments via hard copy or email. A total of 24 map comments and five comment forms were submitted. Six emails were also sent to the project email address. We heard a great deal from residents and employees of RNS, and all of these comments are being documented and considered. Here are some key themes:

· More frequent, reliable bus service is needed on weekends and at off-peak times.

· All areas of RNS need to be served better by transit.

· The RNS area should receive improved active transportation (bicycle, pedestrian) amenities on the street and these should be incorporated into new development to encourage multi-modal uses.

· A review of low-cost, operational improvements that can achieve bus and auto efficiency should be implemented as quickly as possible.

· Stronger connections must be made between major "El" stops and major tourist destinations such as Navy Pier, the lakefront, Museum Campus, Michigan Avenue, and Millennium Park; these connections should be very understandable and incorporate wayfinding signs.

In June 2014, two pop up meetings were held to discuss the project. The first of our pop up series showcased the project, what the study would accomplish and people’s thoughts on having better transit connections to the River North-Streeterville area 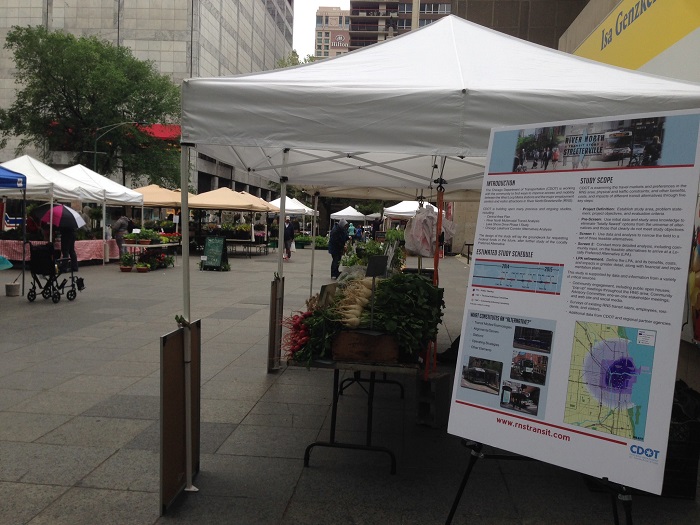 The first two Pop Up Meetings in June 2014 enabled residents, employees and visitors to learn about the project and what improvements should be made.

In April and May 2015, the project team hosted two pop up meetings that showcased 13 alternative transit paths. Participants were asked to review the list of 13 alternatives and place a star on the routes that would be most useful to them.

Forty-eight stars were placed on the alternative transit paths activity during Pop Up meeting #3. Of those stars, 39.5% of participants marked that the Loop Link + Michigan or Fairbanks Avenue would be most useful to them. The Chicago Avenue path was the second highest path, which received 27%. The third highest ranking transit path was the Grand/Illinois + Blue Line Connection, which received 12.5%.

Results were similar for the fourth Pop Up meeting. The meeting had thirty-five stars to indicate most useful alternative transit paths. Almost thirty-two percent (31.5%) of people said the Loop Link + Michigan Avenue transit path would be most useful to them. This was followed by Chicago Avenue (20%) and Grand/Illinois route (17%).

The RNS project team has conducted several surveys to better understand how residents, employees and visitors travel within the River North-Streeterville area. Throughout 2014, four different surveys were conducted; an onboard CTA bus survey, an employee survey, a resident survey and a visitor survey. 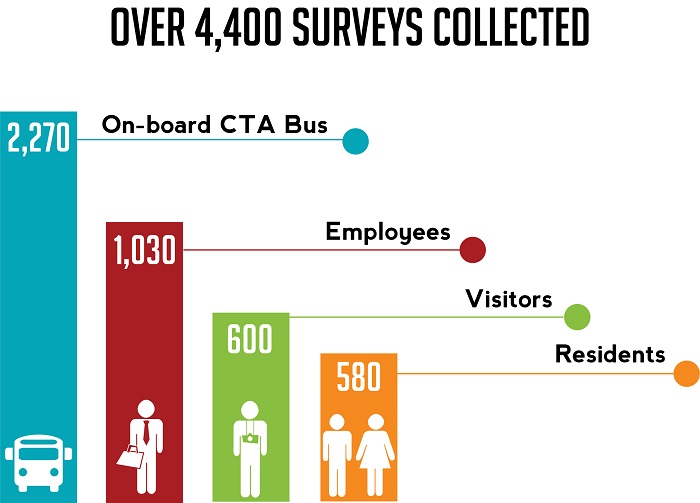 As a result of analysis and community engagement, short and long term potential transit improvements have emerged.

There are often minor improvements that can be completed in the short term at minimal cost that have a real impact on travel delay and other passenger inconveniences on transit routes located along the study corridors and throughout the Loop. The following brochure below includes these improvements.

Long term considerations include dedicated busway implementation along select corridors in River North-Streeterville. The three improvement corridors are included below:

These short and long-term improvements are recommendations for consideration for possible future projects. CDOT welcomes feedback on these improvements.