“When we call the Earth by way of distinction a planet and the Moon a satellite, we should consider whether we do not, in a certain sense, mistake the matter. Perhaps - and not unlikely - the Moon is the planet and the Earth the satellite! Are we not a larger moon to the Moon, than she is to us?” by Christine Tarkowski

Christine Tarkowski is a Chicago-based artist who works in a variety of mediums including sculpture, printed matter, photography and song. Her works range in scale from the ordinary to the monumental. Equally variable is her scope of production which incorporates the making of permanent architectural structures, cast models, textile yardage and temporary printed ephemera

Constructed from approximately 400 charcoal-hued, 12-inch cast concrete blocks, the 10-foot high pavilion-like structure comes out of an ongoing series exploring symbolic transplants of iron grills and decorative concrete screen blocks found throughout the Caribbean and the American South. These decorative screens, known as rejas and quiebrasoles, are ubiquitous in Soto’s birthplace in Puerto Rico.

Luftwerk in collaboration with Katherine Young

Requiem: A White Wanderer is an ongoing art and sound project by Chicago-based collaborative Luftwerk to inspire a robust public dialogue about climate change here in Chicago and beyond. Inspired by Larsen-C, a 120-mile long crack that ran along the Antarctic ice shelf and broke into a trillion-ton iceberg named A 68 in 2017, Requiem: A White Wanderer translates seismic data from this ailing iceberg into an emotional experience, connecting the public to the urgency of climate change.

Millennium Park will unveil six recent sculptures by American artist Chakaia Booker in a new exhibition in the Boeing Galleries—running April 30, 2016, through April 2018. A seventh, site-responsive sculpture (a new work) will be added in September 2016 in the South Boeing Gallery.

This exhibit features the winning entry of an international Lakefront Kiosk Competition plus work by architecture students at the Illinois Institute of Technology, the School of the Art Institute of Chicago and the University of Illinois at Chicago.

On the occasion of the 10th anniversary of Jaume Plensa’s Crown Fountain, the artist presents four monumental sculptures installed in Millennium Park for this special exhibition, 1004 Portraits.

French artist Jean-Luc Mylayne, acclaimed for his enigmatic color photographs of birds, has created a temporary Chapel building with a 30–foot photo mural on its ceiling.

Millennium Park: An Anatomy in Photographs

Celebrating the 10th anniversary of Millennium Park, this exhibition is curated by John Vinci of Vinci/Hamp Architects and features over 50 images.

This display celebrates 25 years and counting for The Americans with Disabilities Act (ADA) and revealing how Millennium Park was created using principles of “universal design.” 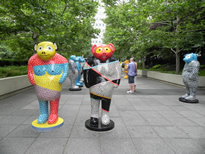 As a pioneer in the field of monumental ceramic sculpture, Jun Kaneko has played with scale and proportion and this installation is representative of his past and present artistic practices. Works presented in the South Boeing Galleries featured Kaneko’s signature Dangos (meaning “rounded form” or “dumpling” in Japanese).

Interconnected: The Sculptures of Yvonne Domenge

Thanks to our Partner