Millennium Park Summer Music Series is presented by the Millennium Park Foundation with support from co-presenting partners BMO Harris Bank, Chicago Free for All Fund, Lloyd A. Fry Foundation, Northern Trust and in honor of the Massey Scholars. DCASE programming is supported by the Chicago Transit Authority. 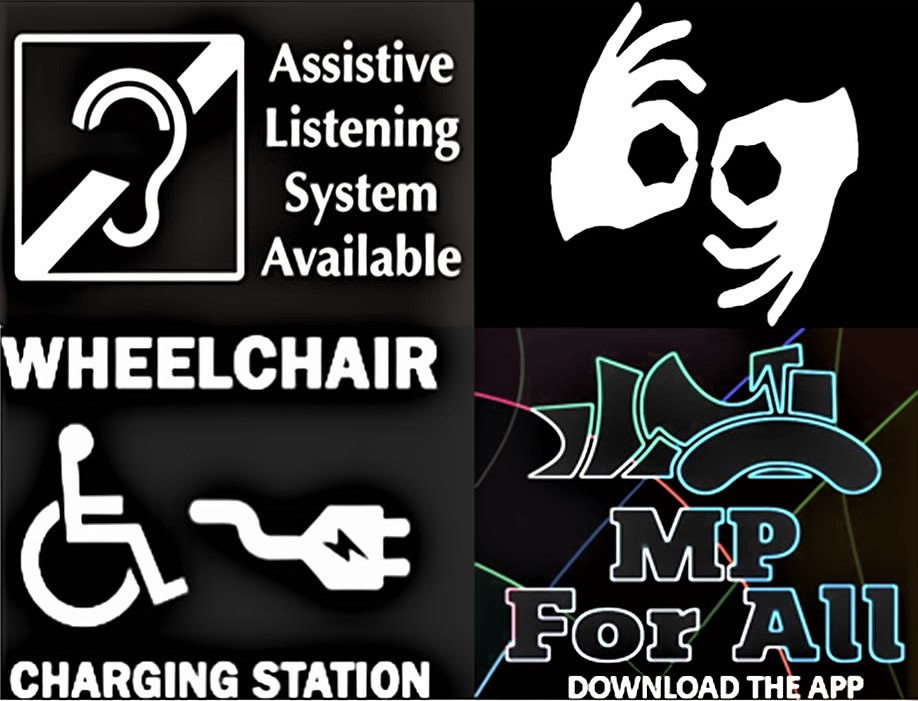 (schedule is subject to change.) Headliners are listed first.

Femi Kuti & The Positive Force – Globally renowned Nigerian Afrobeat saxophonist, composer, bandleader, and activist. The eldest son of Afrobeat legend Fela Anikulapo (Ransome) Kuti, he has expanded the genre's reach to embrace elements of punk, electro, and hip-hop. His new album 'Stop the Hate' features his son Made Kuti, carrying on the tradition once again.

HAT – Moroccan born artist presents audio-visual show that remixes traditional musicians from across the world onto a big screen, shaping them harmoniously into new electro beats.

Abigail Washburn – A singing, songwriting, Illinois-born, Nashville-based clawhammer banjo player every bit as interested in the present and the future as she is in the past, and every bit as attuned to the global as she is to the local. Washburn pairs venerable folk elements with far-flung sounds, and the results feel both strangely familiar and unlike anything anybody’s ever heard before.

Tasha - Tasha’s second album, Tell Me What You Miss The Most mingles pockets of introspection with wide, expansive, marveling at what’s yet to come. Born and raised in Chicago, Illinois, Tasha is a musician who writes songs that take loving and longing seriously. Whether dwelling in the sad thrum of an impending break up or the dizzying, heart thumping waltz of new infatuation, here is an album that traces one artist’s relationship to herself in love. Full of deep, invigorating inhales and relieved, joyful exhales, Tell Me What You Miss The Most is an exquisitely crafted breath of much needed air.

“Won’t you lay near me please / goodbyes aren’t easy to swallow / Here take my heart for me / I don’t need all this old sorrow” Tasha sings, her voice smooth and honeyed in the first track of the album “Bed Song 1.” She stands on the brink of saying farewell to something once-sweet, the sentiment swirling into the slow-walking pace of the second track, “History,” which wonders aloud “Was it me / Did I not prove to you how far I’d go”. Still, the album refuses to stagnate, instead taking the listener on a whirl across a much-missed dance floor in “Perfect Wife,” calling to mind the sheer pleasure and giddiness of dancing hand-in-hand with a pretty girl. “Perfect Wife” is also a track that demonstrates Tasha’s musical versatility and showmanship, featuring a seamless, slightly retro chorus embroidered with the lilting chirrup of flutes as played by Vivian McConnell.

Yes, Tell Me What You Miss the Most isn’t just a catalogue of tenderness----it’s also a showcase of Tasha’s growing and formidable musicianship. “When I made Alone at Last, I had only been writing songs for two years. I hardly even knew what kind of song writer I was. But this record feels much stronger as far as a representation of my songwriter and musicianship,” says Tasha, adding “I did feel like I was piloting it in a way that I haven’t really felt before.” Take the heady soprano whisper of “Sorry’s Not Enough” that crests into the wave-crashing roll of dissonance propelled by Ashley Guerrero’s insistent drumbeat. From its attention to instrumentation, the clean strumming of guitars both acoustic and electric, to the steady stretch of Tasha’s vocals across each verse and chorus, this is an album that follows an artist as she produces a sound all her own.

In its second half, the album becomes more spacious, peering with clear eyes toward a blue horizon threaded with a folk tinged, out-of-doors sound. Chimes recorded outside her grandfather’s house twinkle on “Love Interlude.” On “Burton Island,” Tasha sings of “the sun’s last song,” asking “honey dance for a while, dance for a while.” In fact, many of these songs seem to invite gentle dancing, the type of breezy bodily weaving one might engage in on a Saturday morning or a firefly-dotted summer night. These are swaying songs,” Tasha says, extending an invitation to her listeners to rock back and forth, cradled by her music.

“I was inspired by a distance I felt from myself,” says Tasha of the album, “the writing was kind of born from this desire to get back to an intimacy, or honesty, with myself.” Other inspirations include kissing, long drives in nature, her mother, and “winter and all that it allows (being alone inside, wrapped up in something warm, feeling things deeply.)” Her list of inspirations is a collection of types of touch; fleeting affectionate touch, the brush of a knit blanket, the bracing grip of feeling one’s own skin twinned in a palm. So too does the album veer in and out of touch with Tasha herself, tracing tenderness and loneliness, the paradox of feeling held and utterly abandoned at once.

As the album winds down, the feeling of a sun setting or a year ending begins to glow, as if Tell Me What You Miss The Most charts a path through the desolate starkness of a personal winter, the blossoming of an internal spring, the blaze of a heart’s summer and then the golden dénouement of autumn. Regarding the shape of the album itself, Tasha discusses her intention for it to feel like a finished, fully realized piece of art. She says, “I wanted very much for this to feel like an album with a start and finish, where there’s an arc that’s brought back around.” An organic feeling of rise and fall lifts the album from beginning to end, especially given the bookend of “Bed Song 1” and “Bed Song 2.” Between these Bed Songs lies a journey of emotional burnishing, of loss, realization, re-imagination, with dreams bounding toward the future. Still, we begin and end in a place of intimacy and rest, reflecting Tasha’s long held belief in the necessity and power of respite. Listeners might recognize the bed as not just an album through line but a career one. Even while Tell Me What You Miss The Most represents growth and change, Tasha notes that “there are parts of me as a songwriter and emoting poet-person that carry over. Bed might be the obvious connection.”

Listen to Tell Me What You Miss The Most as the sun peeks its downy head over the rooftops. Listen as you sit down to your cup of coffee, listen as you remember someone you once loved and wonder what might have been. Listen as you imagine different pasts, their many colors laid out before you, dizzying in their potential. Listen as the sun sets again and the moon rises, her cool face perfectly hung in the night sky. Listen as you imagine all the people you might someday be, all the mornings you’ll grow to greet. Listen as you pull someone close. Listen, and let the album pull you close.

PRESS
“Genre fluid like Lianne La Havas and Jamila Woods, with decorative-but-unobtrusive guitar work and electronics, Tasha roots her songs in a conversational poetry that hits like heart pangs.”
- NPR
“Tasha makes wondrous, gentle soul that advocates for self-care - she reimagines the world as loving and safe while exploring the hurt and anguish inherent in navigating our society, especially as a queer black woman.”
- Pitchfork

Ric Wilson – Voted 2nd best live show in Chicago 2019 only after Lizzo for his Pitchfork performance (Chicago Tribune), Ric Wilson is a young Chicago stand out that makes party-ready hip-hop with an intelligent twist. Wilson’s funk/disco-infused take on rap stimulates both the mind and body with robust percussion, buoyant vocal arrangements and triumphant instrumentation. Wilson’s music is playful and poignant, with youthful innocence that’s still ever-aware of the difficulties life may throw at you. But instead of lamenting and brooding, Wilson chooses to bask in the beauty of it, dancing through the struggles while remaining acutely aware of his emotions.

DakhaBrakha – Global folk-fusion quartet from Kyiv, Ukraine that expands upon fundamental elements of sound and soul and combines them into a musical alchemy they call ‘ethno-chaos.’

Chicago Immigrant Orchestra - A 12-piece ensemble that consists of members of the Chicago immigrant community, representing musical traditions from all over the world. Originally founded in 1999 as part of DCASE’s first-ever Chicago World Music Festival.

Jeff Tweedy – Best known as the founding member and leader of the Grammy Award-winning American rock band Wilco, Jeff Tweedy is one of contemporary music’s most accomplished songwriters, musicians, and performers.

Kinsey: A Memoir by Roy Kinsey – Chicago born and raised, Roy Kinsey is a black, queer-identified, rapper, and librarian.

Ana Tijoux – The New York Times points to her as the Latin American response to Lauryn Hill. Her music dialogues to the sound of hip hop and Nueva Canción Chilena. A feminist and activist in her lyrics, she denounces social and cultural deficiencies.

Pay in person at each garage location or pre-pay online. Visit millenniumgarages.com/rates or call 312.616.0600 for 24/7 customer service.

From the elevated lines: exit at Washington/Wabash and walk east.

From the subway: exit at Lake (Red Line) or Washington (Blue Line) and walk east.

Questions? Check out our Plan Your Visit and Attending An Event pages.

CIMAFUNK – An Afro-Cuban rockstar who brings out the best in Cuban rhythms and traditions, and infusing sounds and styles from Africa and the U.S.

Charles Stepney: Out of the Shadows – A tribute to “one of the underrated heroes of Chicago soul music,” Stepney contributed to the sounds of Muddy Waters, Minnie Riperton, Ramsey Lewis, Earth, Wind & Fire, and more. For this special event at Millennium Park, Stepney’s legacy and music will be brought to light, celebrated and performed by a new large ensemble called Rotary Connection 222 under the musical direction of bassist & bandleader Junius Paul, with creative direction by The Stepney Family and International Anthem.

Black Monument Ensemble – A vibrant collective of artists, musicians, singers, and dancers making work that represents the richness and diversity of Black artistic excellence in Chicago.