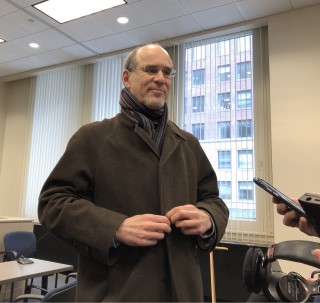 Steve Berlin, 63, was appointed as the Executive Director of the Board of Ethics by then-Mayor Rich Daley and confirmed by the City Council for this position in December 2008.  Before that appointment, he served as the Board’s Acting Executive Director, from October 2006, and began his City career in September 1993 as the Board’s Deputy Director. In his years with the City, he has implemented major changes to the City’s ethics and campaign financing laws, under both Mayor Rahm Emanuel and Mayor Lori Lightfoot, and has advised tens of thousands of City employees, officials, lobbyists and contractors on complying with the letter and spirit of the City’s ethics laws.

Steve is a Past President of COGEL (the Council on Government Ethics Laws, an international organization with more than 500 members, most of which are ethics, campaign financing, lobbying, election administration, and FOIA regulating agencies and personnel throughout the U.S. and Canada at the federal, state/provincial, and municipal levels).  He testifies and appears regularly at conferences and panels as an expert on ethics in government. In June 2012, he served as a State Department Legislative Fellow in the Republic of Georgia, advising officials there on establishing and maintaining government ethics institutions, and also served as an adviser to former Lt. Governor Sheila Simon's committee to rewrite the Illinois Governmental Ethics Act. He is a member of the Chicago Bar Association's Government Lawyer Committee, and an adjunct member of the American Law Institute's Principles of Government Ethics project.

He received his J.D. in 1984 from Northwestern University's Pritzker School of Law, and received his B.A. in history, cum laude, from Amherst College in 1980.  In 1991, he earned an M.A. in Ethics from the University of Chicago’s Divinity School.  He began his legal career with Altheimer & Gray in 1984, then worked for Rudnick & Wolfe (now DLA Piper), both in Chicago. He also worked as Research Attorney for the American Judicature Society, and was a Fellow with the Park Ridge Center for Health, Faith and Ethics. From 1991-2013, he taught Business Ethics and the Arts as an Adjunct Professor at Columbia College Chicago.  He is the proud father of two daughters, and is both a Cubs and White Sox fan, living proof that this is indeed possible.