Office of Budget and Management

OBM prepares and implements the City of Chicago’s annual budget 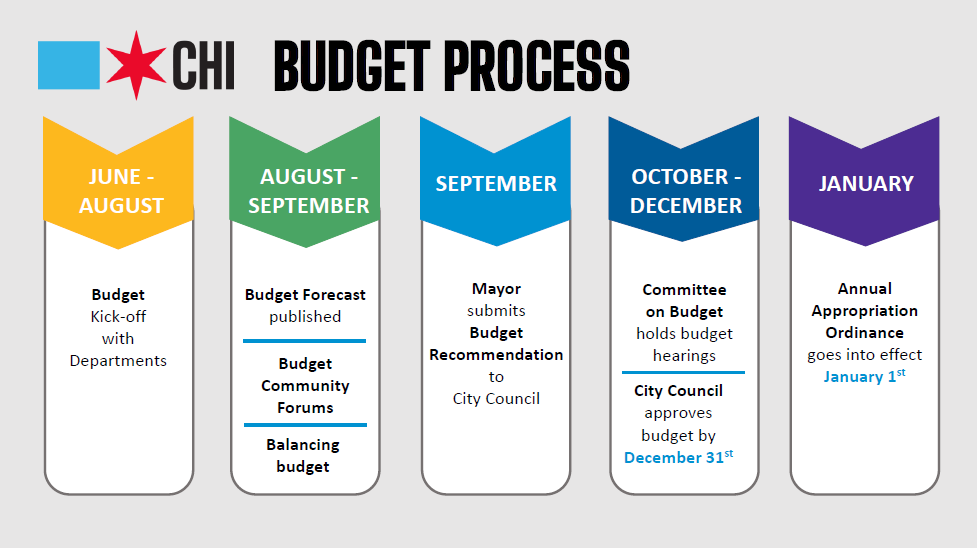 Each year, the budget is developed over several months with input from City departments, elected officials, and the public. The general budget calendar is presented below.

Departments submit preliminary revenue and expense estimates to the Office of Budget and Management (OBM).

In accordance with Executive Order No. 2013-1, the City presents the Annual Financial Analysis to the City Council and the general public.

OBM receives detailed budget requests from City departments and holds a series of meetings with each department regarding the department’s needs for the coming year. The City solicits public input on the development of the City budget. OBM works with the Mayor’s Office to match expenses with available resources and balance the next year’s budget.

Additions or changes to the proposed budget are considered. City Council must approve a balanced budget by December 31st, at which point the Budget Recommendations become the Annual Appropriation Ordinance. The Final Action Plan is submitted to the U.S. Department of Housing and Urban Development for funding consideration.

Throughout the year, OBM manages the resources allocated through the Annual Appropriation Ordinance. OBM regularly reviews revenues, expenditures, and any trends or events that may affect City finances. On an ongoing basis, City departments provide information about the performance of City programs to ensure that City resources are used in a manner that maximizes taxpayer value and provides the highest quality services.