Chicago is the first destination of the installation, which served as the U.S. representation at the 13th International Architecture Exhibition at the Venice Biennale (2012). The Chicago installation will recreate the lively exhibition design of pull-down banners, created by Brooklyn design studio Freecell and Berkeley-based communication design firm M-A-D. The contents of the exhibition have been updated to include more recent and more local projects. Among the 84 projects that will be presented, more than a dozen are from Chicago, including several that also appeared in Venice.

Spontaneous Interventions, organized by Cathy Lang Ho on behalf of the Institute for Urban Design, is devoted to the growing movement of architects, designers, artists, and everyday citizens acting on their own initiative to bring improvements to the urban realm, creating new opportunities and amenities for the public. The exhibition received over 178,000 visitors in Venice, and earned a Special Mention from the Golden Lion jury, the first time the United States has been honored in the history of the Venice Architecture Biennale.

Our goal with Spontaneous Interventions is to use the exhibition as a framework for understanding a larger movement, in which citizens all over the world are devising and implementing clever, low-barrier urban interventions to make their cities more inclusive, sustainable, pleasurable, and safer,” said Cathy Lang Ho, a New York–based design journalist and curator. “For this reason, we have organized a rich roster of programs that will place the trend of tactical urbanism in the context local urban issues and citizen action.” Program director is Samantha Topol, a Chicago editor and writer.

Artists and Organizations Featured in the Exhibition: 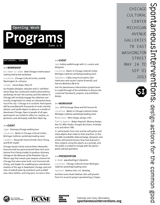