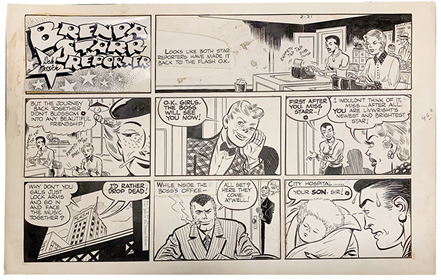 A significant but often overlooked contribution to American art and culture is Chicago’s role in the development of the early comic strip. Through its countless newspapers and its publishing industry, Chicago led the transformation of comics from daily fantasy and joke features into ongoing stories grounded in the textures and details of real life, its first real step towards legitimacy as an expressive language and semi-literary art form.

The exhibition focuses on the origins of the comics in popular publishing, the immeasurable importance of African-American cartoonists and publishing, the first woman cartoonists and editors, the first daily comic strip, and finally the art and comics of undeservedly forgotten Frank King, who with “Gasoline Alley” captured not only the rhythms and tone of everyday existence in his characters that aged not only at the same daily rate as its newspaper readers, but were also fictionalized versions of real people.

Curated by artist and author Chris Ware, and Chicago Cultural Historian Emeritus, Tim Samuelson, this exhibition is designed and planned as an intentional historical companion to the concurrently appearing survey of contemporary Chicago comics at the Museum of Contemporary Art, in which Ware’s work also appears.

This exhibition is made possible through support from the Terra Foundation for American Art.