To help guide West Loop investment and growth, the Department of Planning and Development (DPD) is making the maps, plans, initiative information, and other resources available below to the public. These documents are among the materials that DPD and other City agencies use to assess proposed development projects that require formal review.

West Loop residents, stakeholders and developers can sign up for email updates from DPD to ensure they receive the latest planning news in the West Loop.

The Local Impact Fund (LIF) receives 10% of the revenues generated by the Neighborhood Opportunity Bonus program, which enables developers of downtown construction projects to increase floor area in exchange for voluntary payments. The Adopt-A-Landmark Fund also receives 10% and the Neighborhood Opportunity Bonus fund receives 80%. LIF funding is allocated by DPD in consultation with local aldermen towards eligible public improvements in the downtown area.

On May 23, 2022, DPD and the Chicago Department of Transportation (CDOT) hosted a virtual community meeting with Ald. Walter Burnett (27th), Ald. Byron Sigcho-Lopez (25th) and Ald. Jason Ervin (28th) to solict feedback on local priorities for LIF funding in the West Loop. The engagement process included a live survey with 52 responses and an online survey with 723 responses. A recording of the meeting and the survey results are below.

As a result of public feedback, timing and funding considerations, $2.9 million in LIF is being allocated toward Madison Street improvements between Ogden Avenue and Halsted Street. CDOT will use the funding in early 2023 to refine the project scope, budget and overall construction timeline.

For the other projects that were included in the survey but not selected in this round of LIF allocations, DPD will continue to work with area aldermen, departments, and sister agencies towards their implementation. 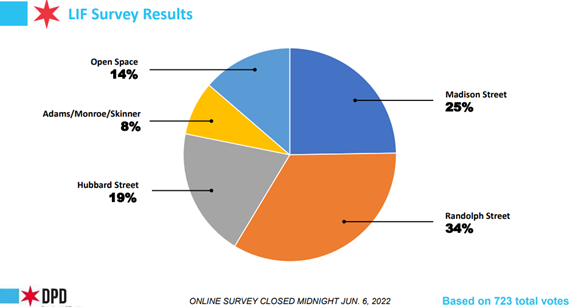 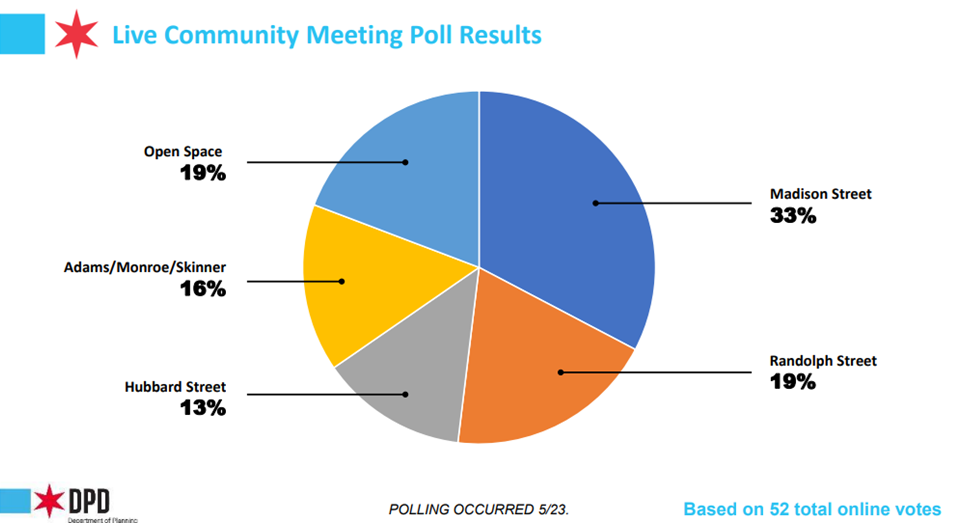 On Oct. 12, 2021, CDOT and DPD co-hosted an informational webinar with Ald. Walter Burnett (27th) to update the Near West Side community on the feasibility of a future Metra station and a related track realignment project. The meeting presentation is available for review.

New Affordability Goals in the FMID

The City of Chicago is seeking to create more mixed-income development in the West Loop by providing more affordable housing options in the Fulton Market Innovation District (FMID), as recommended in the FMID Plan Update adopted by the Chicago Plan Commission in February 2021.

The plan update calls for new development to try and exceed the City's typical affordable housing requirements, which range from 10 to 20 percent affordable units for new residential developments. For the area north of Lake Street, within the FMID, the City will work with developers to achieve 30 percent affordability. Given current market conditions, the City expects the higher percentage will require public assistance. More information on this and other recent reforms to the Affordable Requirements Ordinance (ARO) can be found on the Department of Housing's website.

DPD commissioned a study in 2019 to analyze the infrastructure conditions within the Kinzie Industrial Corridor from Lake Street to Hubbard Street and from Halsted Street to Odgen Avenue. Prepared by AECOM and completed in 2020, the goal of the study is to identify existing condition infrastructure issues, opportunity sites that may be developed in the future, and infrastructure priorities for the area.

The change in zoning was adopted by City Council as a part of the implementation process for the 2014 Fulton Market Innovation District, referenced below.

After more than a year of public review, City Council designated the Fulton-Randolph Market District as a Chicago Landmark in July 2015. This designation enhances the area's prestige, increases the value of the properties within it, and will continue to stabilize an entire neighborhood by encouraging developers to:

The FMID Plan was adopted by CPC in July 2014 and identifies a vision to preserve existing jobs while accommodating private sector investments that reinforce the area's expanding role as an innovation-driven employment center. The FMID is the original, guiding document that led to the creation of all the aforementioned ordinances.

DPD commissioned a study in 2019 to analyze the infrastructure conditions within the Kinzie Industrial Corridor from Lake Street to Hubbard Street and from Halsted Street to Odgen Avenue. Prepared by AECOM and completed in 2020, the goal of the study is to identify existing condition infrastructure issues, opportunity sites that may be developed in the future, and infrastructure priorities for the area.

The City of Chicago has six Enterprise Zones, and the West Loop falls within Enterprise Zone 4. The primary purpose of the Enterprise Zone program is to stimulate economic growth and neighborhood revitalization by offering state and local tax incentives to companies expanding or relocating within depressed areas.