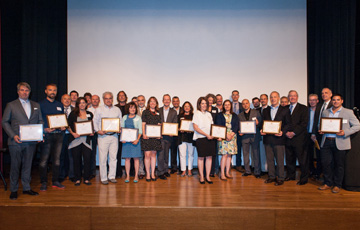 “Through their individual projects, the winners are helping to preserve Chicago’s historic legacy for generations to come,” said Commission Chairman Rafael Leon. “Their efforts and investments demonstrate a remarkable commitment to the City, its buildings, and its neighborhoods.”

Distributed for the 16th year, the awards are given to the top projects reviewed in in the last 12 months by the Landmark Commission’s Permit Review Committee. All the winners are designated Chicago landmarks, properties with landmark districts, or are helping to support Chicago's architectural history.

This year’s John Baird Award for Stewardship in Historic Preservation was awarded to the National Parks Conservation Agency and Chicago Neighborhood Initiatives, which helped secure the declaration of the Pullman Historic District as a National Monument. The organizations were recognized for their work coordinating a coalition of preservationists, local residents, organizations and legislative leaders to support Pullman’s establishment as a National Monument within the National Park System. The designation was announced in February 2015 at a special ceremony attended by President Barack Obama and Mayor Rahm Emanuel.

Fifty three Preservation Excellence awards have been distributed under Mayor Emanuel. Over that time, 41 structures have been designated as official landmarks, making them eligible for future awards from the Commission.

Information about the individual projects is available below.