The Department of Housing (DOH) is committed to ensuring that Chicago's housing resources and policies address the needs of residents of all income levels. 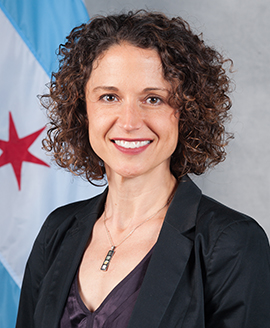 Marisa Novara was appointed Commissioner of the Department of Housing (DOH) by Mayor Lori E. Lightfoot in June 2019.

As DOH commissioner, Novara directs the City’s efforts to keep Chicago affordable for all income levels through projects and policies that address the needs of tenants, landlords, developers, homeowners and other community stakeholders.

Before joining the department,  Novara served as a policy director for Mayor Lightfoot’s transition team and was formerly vice president of the Metropolitan Planning Council (MPC). During her 8-year tenure at MPC, Novara designed and managed the Cost of Segregation project, a 2017 study that concluded how decades-old patterns of racial and economic segregation cost the Chicago region an estimated $4.4 billion in additional income each year. She also led the subsequent creation of the region’s first comprehensive guide to a more racially equitable future, among other reports, studies and articles.

She lives in the Little Italy neighborhood with her family.